Our last trip while we were on holiday in Dumfries and Galloway was to Krikconnel Flow which is a Scite of Special Scientific Interest. This reserve is mostly made up of raised peat bog, which is one of the most threatened habitats in the world, surrounded by mixed woodland.

The reserve is beautiful and always worth visiting, with a high chance of seeing common lizards 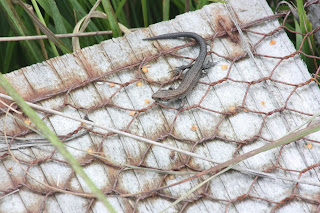 (See this post for photos of more common lizards from our last visit there in 2016, when it was hot and sunny and there seemed to be lizards everywhere we looked! We saw far fewer this year, largely because it wasn't so sunny).

It seems, sadly, that the bog area of the reserve isn't being managed as well as it should be to keep it as a peat bog - there are lots of birch saplings growing in the bog area which will eventually take over and transform the area into woodland. 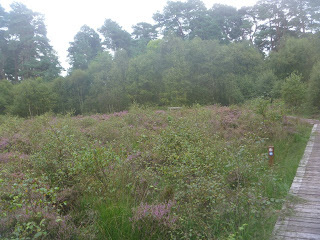 Of course woodland is a good thing, but as I pointed out above, raised peat bog is one of the most threatened habitats in the world. Last time we visited, Kirkconnel Flow was a National Nature Reserve, but no longer is. This denotification will probably be due to its not having been looked after properly and so my guess now is that it will be allowed to become woodland and this area of valuable peat bog will be lost. After our last visit to Kirkconnel Flow, I wrote to Scottish Natural Heritage about the state of the site (which was even then already lbviously in decline as a bog) and never received a reply. Another letter is due I think.

On the positive side, the woodland around the bog is still beautiful 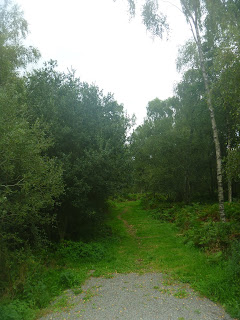 and is full of interesting fungi and lichens 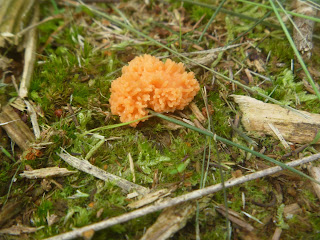 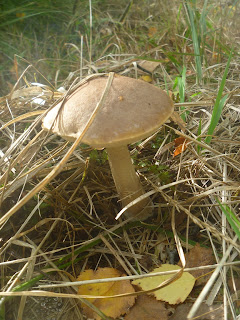 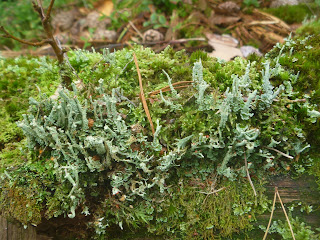 Edited to add: this is the reassuring reply I received from the Reserves Manager for Southern Scotland of Scottish Natural Heritage:

In relation to the raised peat bog, we are currently finalising funding to carry out extensive work on the bog this winter. The work will address the birch regeneration, raise the water table further along the south western side and address areas of continued water loss.  We had to make a change to our timetable in order to receive our funding through the Scottish Government Peatland Action stream, so although a bit delayed, the work will be large scale and hopefully very effective.

I took over the management of the reserves for Southern Scotland at the beginning of 2018 just at the point of de-declaration, as I understand in the evaluation process the site was seen more as an area of local rather than national interest.  Given the unique and specialist species that we have on site I can see why this may seem a bit odd, however, most importantly for the natural heritage interest, the reserve is owned by SNH and will continue to be managed as a reserve with the same objectives and responsibilities as before.   Our new CEO is committed to the protection of our wildlife habitats and has led a much invigorated approach to our suite of reserves. We secured another reserve officer to our area at the end of 2018 to cover the work at Kirkconnell Flow and the site is already showing signs of benefitting from this additional resource.

Crafted by Crafty Green Poet at 10:22 am

Nature nurturers itself; humans, must protectively worship such gifts.

Have to keep watch over the rascals ..... far too few do!