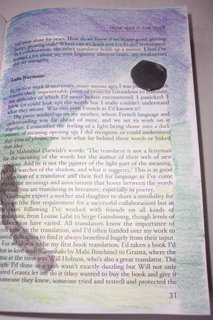 Inspire Me Thursday recently had a makeover and is a now a wonderful resource for inspiration for crafting bloggers. This week's prompt is to be inspired by books. I love books! For my direct response to the prompt I started a new altered book. I have a copy of In Other Words (The Journal for Literary Translators) which struck me as ideal material for an altered book. I will work on this slowly and will occasionally post pages. This is the first page. I selected words from the text and then built up a picture around these words. I deliberately kept this simple, largely due to not having time to do anything complicated! It all looks a bit pale in the photo, but i hope you get the idea! The silver circle represents both the moon and the mirror in the selected text. The selected words almost form a poem:

Alone for years
translator holds up a mirror
many moons ago
impenetrable prose
light shone into dark
meaning opening up.
Translator -
watcher of the shadow and what it suggests.
Meanings hover between words
poetry
dazzling.


For other examples of my book related crafts, please see:

I don't generally read fantasy fiction, despite the fact (or perhaps because?) my partner reads virtually nothing else. However I recently read Francis Spufford's memoir about his childhood reading and he had been a real fantasy fan. This book, Mythago Wood, was mentioned and sounded interesting. Lo and behold it was on my partner's bookshelves! So I read it - its good to read something entirely different to your usual reading once in a while! Mythago Wood is based on an interesting idea about a woodland that exists largely as the result of the collective imagination and is populated by mythagos - people, animals and even buildings that also come from the collective imagination. I found this fascinating, especially the persistance of ancient types in the human subconscious and the subtext that the wildwood is nature waiting to take over all human follies, such as the entire modern world itself. I enjoyed the adventure element of the story too, though it sometimes felt contrived.
In theory I like science fiction and fantasy because of the way they use invented worlds to comment on real life. Escapism with a serious point, if you like. In practice though I tend not to read genre fiction at all.
This just about fits belatedly with last week's Sunday Scribblings prompt of fantasy.
Crafted by Crafty Green Poet at 6:32 pm 2 comments:

The prompt on One Deep breath this week is to write haiku or tanka about Process. As I recently reviewed a very inspiring tanka publication (Gusts, a Canadian tanka journal) I wrote a tanka as well as a haiku. Both pieces deal with the process of craft as inspired by the natural world.

dawn –
birdsong inspires me
to poetry.

I carve
the twisted branch -
a bird
frees itself
from the wood’s grain.

Thanks to all of you who shared your ideas on blogging and what you wished you had known when you started out! Unfortunately the course i was to be teaching this term has been cancelled due to lack of interest. It will hopefully happen next term and I'll save all your ideas until then and will credit everyone for their ideas. I now know not to rely on Edinburgh council having enough marketing in place for all their courses and will be doing much more active marketing myself next time round!
Crafted by Crafty Green Poet at 7:37 pm 1 comment:

Email ThisBlogThis!Share to TwitterShare to FacebookShare to Pinterest
Thinking about: In and around Edinburgh, tutoring

We are prisoners in our smart suburban houses,
our chic city apartments,
yet think we are free.

We ignore the cries of the lost and the poor,
the laments of the dying
wilderness.

We don’t listen to the gathering thunder,
the growling sounds
from underground.

We don’t see the towering walls
of debris and water
hanging over us.

We will awake too late
to begin scouring
paths of escape.


Thanks to Jemima for letting me use the line 'scouring paths of escape' from her excellent poem: Big Come Down.

Poetry Thursday
Crafted by Crafty Green Poet at 8:45 am 27 comments:


We walked round the Botanic Gardens in Edinburgh this weekend and were delighted to see:


For the interests of this post, I tried an experiment:

showing my rabbit
how beautiful she is -
reflection ignored.


Reflections for One Deep Breath.
Crafted by Crafty Green Poet at 10:14 am 27 comments:

I've been asked by Edinburgh Council to teach a course on blogging starting from the week after next (as long as enough people are interested!). So I thought this week's Sunday Scribbling prompt 'Ideas' offered an ideal opportunity to ask other Sunday Scribblers and other visitors to share ideas about blogging. Areas where your ideas would be most useful are:

1) When you first started blogging, what would you have found most useful to know?

3) What are the best things about blogging?

4) What do you find difficult about blogging?

5) How do you keep yourself going as a blogger - how do you think up ideas for what to write about? (I will be suggesting my students visit Sunday Scribblings of course!).

Please feel free to also add in other ideas about blogging that you think may be interesting to beginner bloggers. I will of course give you credit for any of your ideas that I share with my student. Thanks!
Crafted by Crafty Green Poet at 3:24 pm 17 comments:

Email ThisBlogThis!Share to TwitterShare to FacebookShare to Pinterest
Thinking about: Sunday Scribblings, tutoring 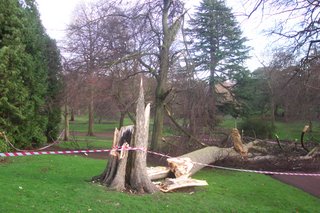 Edinburgh has had terrible weather the past few days, constant rain and gale force winds. In the middle of the Botanic Gardens:
tree torn up in storm
fallen across the pathway -
robinsong.
Trees have also been uprooted along the Water of Leith that runs through Edinburgh. Hopefully some of the dead stumps and branches will be left to grow fungi, lichen and moss. Hopefully one day I'll get some good photos of lichen and fungi, because there are some beautiful examples along our woodland, riverside walks.
Crafted by Crafty Green Poet at 3:27 pm 4 comments:

Email ThisBlogThis!Share to TwitterShare to FacebookShare to Pinterest
Thinking about: Festival of the Trees, haiku, nature diary, photos

The Book of Blood - Vicki Feaver

Vicki Feaver is one of the finest poets currently writing in Scotland, I've heard her read a few times and was interested to read her work on the page for a change. She writes beautifully with a real sense for the sounds and rhythms of language, she uses a lot of subtle internal rhyme. She writes about relationships between men and women and between humans and the environment. I find her attitude to nature often rather disturbing (see the Poetry Thursday post below for more on that!). However her best poetry is truly stunning, like the last poem in the book The Blue Butterfly, where she sees nature in a more pleasant light than she normally does, or in this wonderful extract from Pills, where a woman has come off her medication:

She'd kneel on the lawn,
skirt soaked, rediscovering
the shades of grass; each blade -
like the seconds lost -
separate, sharp., drawing blood
from her thumb. She'd gaze at organges
as people gaze at statues of Christ
on the Cross: the brilliant rinds -
packed with juice, flesh, pips -
exploding like grenades,
like brains, like trapped gases
at the surface of the sun.
Crafted by Crafty Green Poet at 7:36 am 5 comments:

Email ThisBlogThis!Share to TwitterShare to FacebookShare to Pinterest
Thinking about: books, poetry, review

Red in Tooth and Claw

I am currently reading Vicki Feaver's Book of Blood. I enjoy Feaver's poetry a lot, she has a great way with words, using a lot if subtle internal rhyme. However along with John Burnside another excellent Scottish poet, she shows a tendency to sense badness or evil in nature, sort of summed up in the cliched phrase 'Red in Tooth and Claw'. I find this a disturbing and inaccurate view to take, which inspired me to write the poem below.


Red in Tooth and Claw

I would not live with grizzly bears
but nor would I pretend
essential evil in nature.


Cliches for Poetry Thursday
Crafted by Crafty Green Poet at 8:33 am 20 comments:

The UK Prime Minister Tony Blair says that there is no need to cut back on long haul flights to exotic holiday locations. Instead he is putting his trust in science to solve climate change without him needing to make any change to his life style. Read more in the Guardian online.

However, individuals can and need to reduce their personal environmental impact and we can all cut back on flying. If you have friends and family on the other side of the world then you will need to fly to see them. You may be expected to fly for work (but trains can be quicker for a short distance, when you factor in the waiting time in airports). And for holidays, why not explore the beauty of your own country and the neighbouring ones? I haven’t left Europe since I was working in Malawi 15 years ago (when I also had holidays in nearby Botswana and Zimbabwe). I haven’t finished exploring the UK (a small country!) and Europe offers many wonderful destinations that can be reached by ferry and rail. Though, yes I do sometimes take the plane.

Why not sign up to the Flight Pledge and resolve to fly less? To search the alternative options for reaching your destination and to avoid flying, visit No Fly Travel.


More subtle changes for One Deep Breath.
Crafted by Crafty Green Poet at 8:40 am 14 comments:

New Years Day
after the fireworks -
rabbit dead on path*


* there are around 30 rabbits living in the hill below Edinburgh Castle. Our rabbit was safely in our flat, like all pets should be, kept well away from fireworks!
Crafted by Crafty Green Poet at 6:31 pm 19 comments:

Email ThisBlogThis!Share to TwitterShare to FacebookShare to Pinterest
Thinking about: haiku, In and around Edinburgh, rabbits
Newer Posts Older Posts Home
Subscribe to: Posts (Atom)