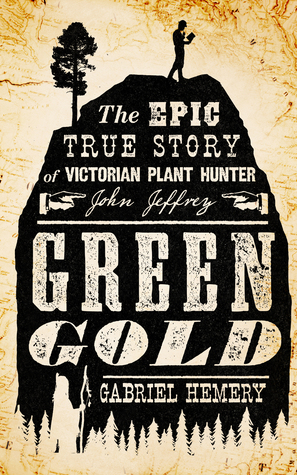 In 1850, John Jeffrey, a young Scottish plant hunter, was sent to find exotic trees in North America and send their seeds back to an elite group of subscribers in Scotland. Jeffery sent collections of seeds and plants and the occasional letter to Scotland, but never sent any journals (which he had promised to do). Eventually he disappeared.

Green Goldis made up of the fictionalised journals of Jeffrey, along with archive letters, labels from his plant collections and minutes from meetings to build a picture of what happened during his travels.

Helpfully the archive materials are marked as such throughout this book, so preventing annoying confusion between fact and fiction.

The fictionalised journals are engrossing and written in a believable style, bringing to life this intriguing early botanist, though some of his attitudes towards environmental concerns and indigenous peoples may be a little more modern than they would in reality have been. The archive materials tend to break the flow of the narrative a little, but add in the historical context for the journal.

As a botanist myself I was particularly interested in how such an early plant hunters trip would have been carried out and the obstacles that Jeffrey's found along the way.

I also love the fact that this book is crowd funded, given that Jeffrey's trip was funded by subscribers, who were given rewards in the form of plant seeds, an early form of crowd funding!

Crafted by Crafty Green Poet at 10:05 am