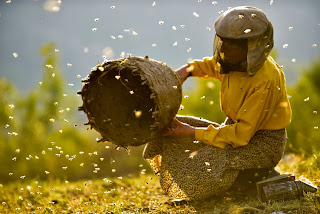 The documentary, Honeyland is the story of Hatidze Muratova, one of the last wild bee keepers in Europe, who lives in the mountains of Macedonia, with her ailing mother, a dog and three cats, the only inhabitants of an otherwise deserted village. Hatidze regularly climbs right up a rockface to collect bees from one of her wild hives, others of which are scattered around the landscape and she also keeps homemade hives.When she harvests the honeycombs, she always leaves half in the hives, to keep the colony flourishing. She takes her honey into Skopje to seel it for 10 Euros a jar.

Then suddenly during shooting Hussein Sam, his wife, Ljutvie, seven fractious kids and their cattle move into the valley, which adds an extra layer of story for the film-makers and creates a different film than was initially intended. Hatidze is very uncertain about these invaders but she makes friends with the children and offers advice on beekeeping to Hussein. However, this fragile harmony is broken when Hussein decides he wants to start beekeeing seriously himself.

This is a beautiful film about living in harmony with nature and how easily that harmony can be broken. It's also a story of community and the respect that needs to be shown to others around you.

Honeyland is screening at Edinburgh Filmhouse until Thursday 19 September.
Crafted by Crafty Green Poet at 6:36 pm

Great review! Sounds like a wonderful movie! Enjoy your day, wishing you a great new week ahead!