A Grand Day Out at Saughton Park

Yesterday was the day of the community celebration of the newly revamped Saughton Park as organised by the Friends of Saughton Park. Crafty Green Boyfriend and I were there early to help with putting up marquees and hiding 30 teddy bears round the park for the teddy bear hunt. The event opened at 11am and the weather was mostly good, except for some early rain and some ferocious winds for much of the day.

I lead two short nature walks during the course of the event, which attracted small but interested groups. There were also garden walks (focussing on the plants in the herbaceous borders) and history walks. There was live music all day (free music!) and a large range of cakes in the conservatory cafe.
The teddy bear hunt proved very popular!

Here are some photos from the day 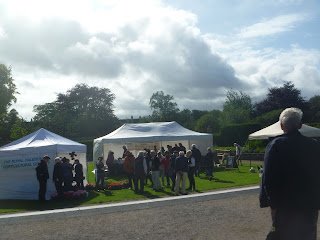 the hub of the event 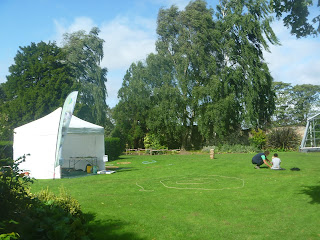 the children's play area, before the children arrived, it got very busy later 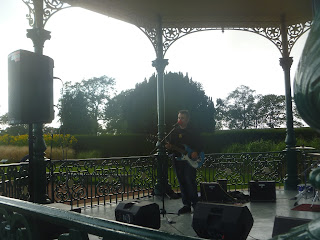 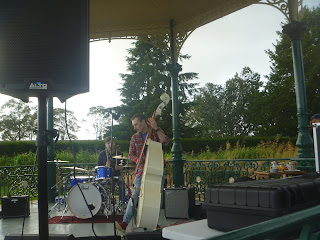 The Phlegm, featuring Saughton Park's history expert Joe on vocals and guitar were the headlining act in the newly restored bandstand.

At the end of the event, a beautiful rainbow appeared! 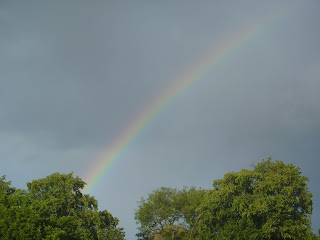 We rescued all the teddy bears and they'll be stored safely and comfortably until the next teddy bear hunt.

**
Coincidentally, my poem Clootie Tree was featured in this month's newsletter from Writers Abroad (Scoll down to read my poem). This poem was partly inspired by the photo prompt in their previous newsletter and partly by the tree in Saughton Park that is decorated with trainers. (Although I'm not currently living abroad I have done in the past!)

**
Crafty Green Boyfriend and I were on holiday in Dumfries and Galloway last week and I'll post photos from our time away over the next few days. We're also on holiday this coming week, though it's a real staycation now, we'll be staying in Edinburgh and having day trips in and around the city. I'll also post photos from those day trips!

I like the idea of a Teddy Bear hunt!

__ Nice that... children whizz around the skate-park, and too, such nifty photos; near us here in New England, we have a township named Stoughton.

We should have a teddy bear hunt at work

Love teddy bear hunts, they are such fun :)
That rainbow looks lovely.