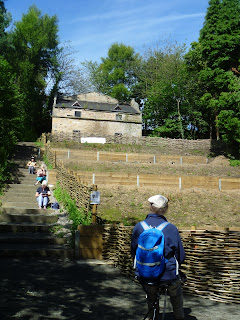 I blogged a month ago about a workshop I had attended at the Hermitage of Braid. The workshop is part of a project, run by the City of Edinburgh Countryside Rangers, and facilitated by Helen Boden, to create poems that will be incorporated into the Walled Garden which is being renovated.You can see the walled garden in progress above (with some of the workshop attendees writing in the sunshine!). The building at the top of the hill is an old dovecot, where pigeons used to be kept. The garden when finished will be a wildflower garden, designed to attract bees and other insects. Some of the pieces from the writing workshops will be displayed in the garden.

It was lovely to have such sunny weather for today's workshops. A number of passing dogs tried to join in! Among the things I wrote was this haiku:


Where's the cat?
A herring gull chasing
a buzzard.

(This may be a very specifically British, or at least European, haiku. Our buzzard mews like a kitten, which I guess may not be the case for buzzards elsewhere in the world!)

As ever, red text contains hyperlinks that take you to other pages, where you can find out more.
Crafted by Crafty Green Poet at 5:40 pm

Email ThisBlogThis!Share to TwitterShare to FacebookShare to Pinterest
Thinking about: haiku, In and around Edinburgh, nature diary

Thanks for the mewing buzzard explanation. I thought it was missing something otherwise!

Here that might be called a Butterfly Garden! A lot of nice working making the wall.

I'm not certain what a buzzard sounds like so only understood your haiku once I had read the notes at the end. Clever haiku and well done. How interesting to be including poetry in this walled garden Great idea.