Science Fiction at the Book Festival 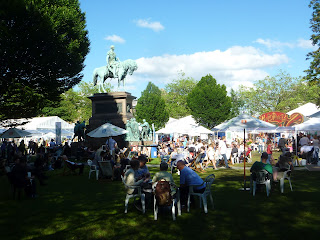 I was back at Edinburgh International Book Festival today to listen to a discussion about the role of science in fiction and the role of fiction in promoting science.

I always like to read about science, though I generally tend to read popular science non-fiction. I am a great fan of the potential of science fiction in stimulating people's thinking about potential futures (and the novel I'm writing could be defined as science fiction though I think of it as speculative fiction in the broader sense, as there isn't enough science in it for me to feel that it really qualifies as science fiction).

Rohn is a scientist and author, who set up Lablit, when she found herself disappointed by the scarcity of real scientists in mainstream and literary fiction (rather than in science fiction or crime fiction). Lablit publishes creative writing about contemporary science and discussions about books in that field.

Stephenson writes mostly novels about the history of science and has set up the Hieroglyph project to bring together science fiction writers and scientists to collaborate on bold ideas.

The discussion was wide ranging and thought provoking, covering topics including feminism and science, scientists as heroes and public distrust of scientists. I've pulled out some of the most interesting points below:

Stephenson said that the current trend for dystopian science fiction is the tail-end of a backlash against the techno-optimism of the 1950s/60s that lead to several environmental disasters and is still seen by some as a large part of the reason we face so many problems today.

Rohn claimed that good science fiction (particularly if it is then made into a movie) can reach a much larger audience than popular science books can, which she seemed to suggest are preaching to the converted. (Personally I think that many SF books are preaching to the converted, because there are a lot of people who won't read SF any more than they'd read popular science).

Rohn suggested that some people don't like to read fictionalised accounts of history (specially if they involve real people) because they don't like the uncertainty of the truth of the story (I agree with this entirely, I don't like historical fiction about well known people unless it is made entirely clear how much of the story is true and how much is made up). Stephenson said that he gets round this issue by using a fictional character as the Point of View character, telling the story, because their point of view doesn't need to fit perfectly with history.

Both authors agreed that large parts of science are boring (endless repetitive experiments!) and these need to be edited carefully to avoid dragging down the plot. At the same time, they both agreed that large parts of science are very difficult to understand, even by scientists studying a different branch of science and that getting information across to the reader can be a real challenge, if you are to avoid the ten page lecture! Rohn suggested conversations between scientists of different disciplines as being the best answer here!

All in all it was a thoroughly thought provoking event and gave me a lot of ideas for how to approach certain issues in my novel! Thanks to Clicket for the ticket and you can read more about all the Edinburgh festivals on the Clicket blog.

*****
In other news, I'm delighted that my piece on Colinton and Craiglockart Dells has been published on the Scottish Book Trust's favourite places website.

As ever, red text contains hyperlinks that take you to other pages, where you can find out more.
Crafted by Crafty Green Poet at 7:30 pm

Email ThisBlogThis!Share to TwitterShare to FacebookShare to Pinterest
Thinking about: books, Edinburgh International Book Festival, In and around Edinburgh, review

Interesting stuff. Although I'm not sure agree with Rohn when she says many people don't like to read a fictionalised account of history – I've found the opposite, just look at the following Philippa Gregory has :). So, yes, if scientists can wrap scientific facts up in a story, I think they could get more readers interested in it. Thanks.

sorry, Marianne, she said some people, and her comment resonated with me because it reflected my opinion of historical fiction that involves real life people (if the characters are invented i don't have teh same problem)

That seemed to be a worthwhile discussion! Surely writing about science, or including science in a story, and keeping it interesting is a challenge!

I'm surpsired to hear that Stepehenson thinks "current trend for dystopian science fiction is the tail-end of a backlash against the techno-optimism of the 1950s/60s". Some of the best dystopian science fiction predates or is current with those optimistic 1950s (when people lived in dread of atomic warfare by the way). How about H.G Wells' The Time Macine from 1895; Jack London's Iron Heel from 1908; Aldous Huxley's Brave New World from 1931; George Orwell's 1984 form 1948; Ray Bradbury's Fahreheit 451 form 1951, John Wyndham's The Chrysalids from 1955 or Kurt Vonegut Junior's short story The Euphio Question form 1951. I could go on. Suspicion of techo-utopian promises is plenty old.

Book festival....always a good time to be had.

Many scientists, including myself, are tired of the two extreme movie stereotypes of scientists - aging, un-athletic, males or laughably-perfect superheroes. We know a positive, realistic image is essential to gain the support of the electorate and policy makers for continued funding of scientific research through federal agencies. We also know their past images have hindered recruitment of bright students, especially women and minorities, to careers in science. Thus we hope there’s a future for science in fiction.

Why should you as a writer be interested? Science in fiction sells. Consider the movie Contagion and three popular US television series - CSI, Bones, and NCIS.

Not all the science in fiction or Lab Lit has to be about forensic scientists. For example, an epidemiologist Sara Almquist is the main character in my new medical thriller Coming Flu (published by Oak Tree Press in July 2012 and available on Amazon). I explored a controversial issue in the novel: when is the common good more important than the rights of individuals? I show several points of view in a community quarantined because of an unstoppable flu epidemic.

Lab lit could also sell to kids. You could write about a theme park executive having a clone of a wooly mammoth made. Scientists have extracted usable DNA from the remains of mammoths frozen in the Arctic permafrost. So in theory it could be done sometime in the future. Think of the problems of feeding and containing a 13-ton animal; most Asian elephants weigh only 5 to 6 tons. It could be very funny.

It’s not that hard to find these scientific tidbits for fiction. Agencies like NIH, have put “non-scientist friendly” descriptions of cutting-edge science on the web. Start with http://heallth.nih.gov. Many universities publish e-zines, press release, and brochures, which are great sources of information on innovative science. They’re also often written in a catchy manner that may spark your imagination.
J.L. Greger, Professor for 25 years at the University of Wisconsin - Madison