All the colours of the flowers

I love the variety of colours of flowers at the moment! I walked along the River Esk in Musselburgh today and then along the John Muir Walkway to Musselburgh Lagoons. The Walkway is a wonderful mass of flowers. I love seeing all the colours together. 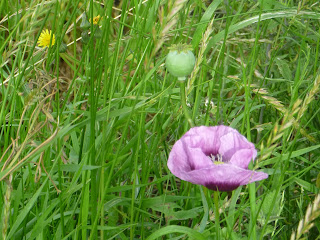 opium poppy with a hawkweed 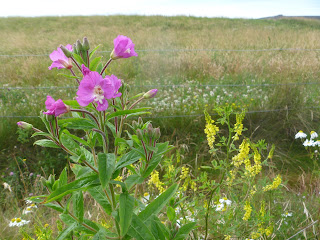 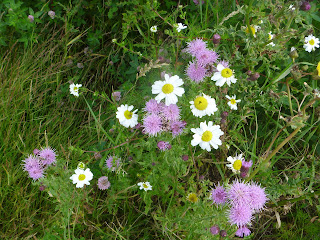 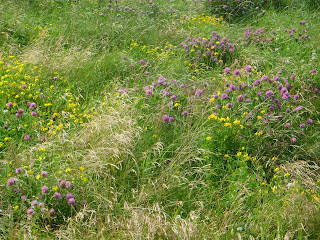 but sometimes its equally nice to see different species that are almost exactly the same shade as each other. 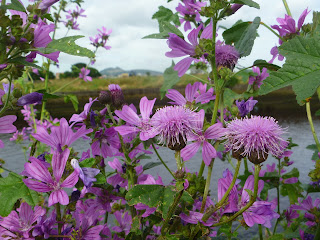 It really felt like summer today, a feeling that has been very rare so far this summer! There were several butterflies flying around - a small tortoiseshell, a few whites, a couple of ringlets and a couple of meadow browns. I also saw two common blue damselflies and a red damselfly which I'm guessing was a large red damselfly.

As there have been the past couple of times I've visited, there were a lot of lapwings on the Lagoons, lovely to see as lapwings are declining drastically in the UK. There were also a lot of terns around in the Firth of Forth, I couldn't get a good enough look to see whether they were common terns or arctic terns. I saw one velvet scoter, though there may have been more further out. There were also lots of eiders as there usually are at this time of year. Several bar tailed godwits too, some in their wonderful summer plumage (which I love seeing, they're more commonly seen round here in their more drab winter plumage). Many other species too!

****
On a different note, I'm delighted that one of my haiku took second place (and two others were joint 8th) in this kukai on Sketchbook.

As ever, red text contains hyperlinks which take you to other webpages where you can find out more.
Crafted by Crafty Green Poet at 2:40 pm

I love all the links you provide on your blogs. It makes it so easy to check out the wonderful variety of birds and ducks you talk about.

A lovely collection. The purples, pinks and yellows seem to go well together at this time of the year.

I have never heard knapweed called hardheads before. Maybe it`s a regional name?

The pinks are so lovely with the greens and the golds, whites and tans make such lovely accents.

A pretty time! Along the roadsides here now is when there are so many varieties of color! er. I mean colour!

Thanks Ms Sparrow, glad you find the links useful!

Dartford Warbler, hardheads is a name found in at least some flower guides, but it may be a northern name!

Rabbits#Guy color, colour, it doesn't matter and thanks!

Thanks for all the photos and the names underneath. The colours are wonderful. It always surprises me at how similar yet how different our vegetations are.

Congratulations on your poetry recognitions.

I love wildflowers. Your photos make me smile.

more flowers
than I could ever name . . .
this haiku

congrats on the 2nd place in the contest.
i like how much you walk and how much you explore and display so beautifully with these photos and kind of envy you for having a tolerable weather.
here it's constantly over 30 degrees centigrade :(