Yesterday I spent the morning in Colinton Dell, along the Water of Leith. I was impressed with these fungi (anyone know the species?) 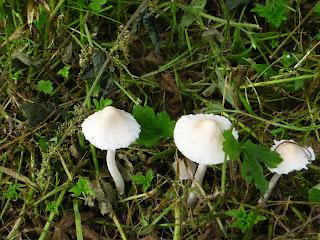 This moth (either a Small Emerald or a Little Emerald, I'm not sure) is very beautiful, but sadly dead. 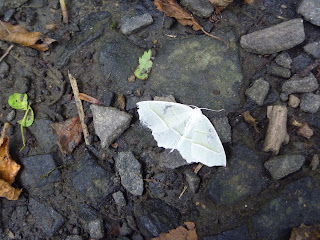 The highlight of the day though was the family of sparrowhawks. There were at least three birds and probably five, all flying around in a group of trees. Every so often one or two of them would fly further afield, all the time they were shouting at each other. Apparently they nested in this group of trees last year and have obviously done so again this year. I think the young had just fledged, there was certainly a lot of excitement going on. I got some wonderful views of the birds in the trees and a couple of times as they flew overhead. They dominated the whole area of the Dells for the whole morning, no wonder I saw only a few other birds! No photos, times like that I just want to watch and enjoy the moment, my photos would never have done justice to them!


For Nature Notes
Crafted by Crafty Green Poet at 12:23 pm

I read an interesting novel recently called The Behavior of Moths--really fun book that I'd recommend to you!

Hi Hannah - I read that book too, about a year ago!

Did the mushrooms grow in a ring?
The shape looks very much like a Fairy Ring Champignon (which is edible) - although I tend to know them a little more beige rather than white.

They are quite distinct by their 'pointy hat', their spaced gills and their fibrous stem.

But check, they can be confused with a poisonous species ...

Hi madhat, no they weren't growing in a ring, they were in a sort of curved line,

Fungi is so hard to identify unless it is really distinctive..Poor moth, but happy that you got to observe the sparrowhawks.. have you gotten some sunshine your way then I hope.. Michelle

Sparrow hawks tend to intimidate all the other birds I have found!

Juliet, sounds like you had some great nature sightings on your walk. Sorry the moth was dead, the family of sparrowhawks must have been exciting.

I looked up sparrow hawks and they look quite fierce. I'm sure they made an impressive showing.

I posted an etegami inspired by your meteor shower haiku if you dare to come look. http://etegamibydosankodebbie.blogspot.jp/2012/08/meteor-shower.html

Moths - oh my. I am still learning butterflys.

I don't know the species but they are very similar to a kind of small fungi, I saw around Charlbury in this early August. They should be very small actually.
My friends had given them a name but I don't remember it.

By the way I'll try to publish in my blog a photo of an eagle-owl I saw at a falconery show in the gardens of Blenheim Palace, Woodstock...