I noted in Friday's blogpost that starting the day off with beer tasting at the Foodies Festival may not have lead to the greatest mental clarity, leading to me forgetting to take the details of the favourite things I sampled there. So yesterday, when I returned to the Festival, with Crafty Green Boyfriend, I made a point of taking notes, I also had to try several more samples of my favourite items just to be sure! So, here is a selection of my favourites from Foodies Edinburgh 2012, from small scale producers based in Scotland or elsewhere in the UK:

ginger curd and bramble and liquorice jelly both from Bracken Hill Fine Foods, based in Yorkshire

carrot & cardamon jam and ginger & apple chutney both from Muriel's Luxury Handmade Preserves. Muriel uses produce grown by her husband Jock in Thisselcockrig, their market garden in East Lothian. They don't have a website.

After extensive sampling, I decided dark chocolate with lavender was my favourite of the amazing chewy chocolate confections from Goupie, based in Kent.

Even extensive sampling couldn't help me find a favourite seed bar from 9Bar and Seed Stacked, based in North Wales. All their bars are equally tasty and healthy!

Yellowhammer and Red Kite, both brewed by the organic Black Isle Brewery (located unsurprisingly on Scotland's Black Isle) are two of my favourite beers (and not just because they're named after birds!).

The raspberry, apple and mint fruit juice I mentioned on Friday came from the Juice Shack (as directed in the bunny friendly sign below). I couldn't find a website for this company. 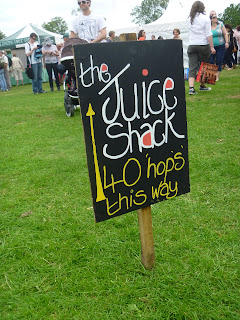 There were plenty of other tasty treats I enjoyed sampling, these were just my favourites!

It was great to see so many small scale producers and retailers represented.


Thanks to Edinburgh based ethical retailer Real Foods for the free tickets for the festival!

Email ThisBlogThis!Share to TwitterShare to FacebookShare to Pinterest
Thinking about: green lifestyle, In and around Edinburgh, review

Have never heard of Bracken Hill Fine Foods here in Yorkshire Juliet - but both ginger curd and that jelly sound amazing so shall look out for it.

Marvellous things, I love dark chocolate too, we could call, in Italian,
the goodies you mentioned Un'Araba Fenice.

In my opinion, you can never go wrong by starting anything with a beer tasting!
:0)
It sounds like a lovely event with many tasty morsels to enjoy.

What an adventure sampling so many interesting and exotic foods. Sounds like you had a really nice time!

wow. it's the kind of festival one loves to like.

Never heard of a seed bar. Thanks for the link.

Ooh bramble and liquorice jelly sounds fascinating - I so want that recipe!