As you may remember, I won tickets to this week's Foodie's Festival from Edinburgh ethical food shop Real Foods. I had entered a competition on their Facebook page, where I had said I would write an awesome blog post about the event if I won the tickets. So here goes. 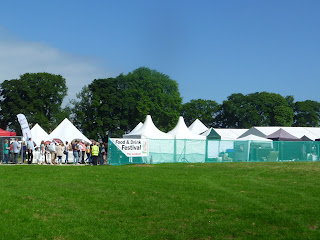 I have to admit, that in terms of clarity and completeness of information about the event, I may have not made the best start by going to a beer tasting session at 11.30am. But as a real ale fan, this was the best choice in the drinks programme for me (the later events being wine, cocktails and gin, of which only the wine could tempt me). Melissa Cole, well known beer writer and enthusiast lead the session and was very entertaining and informative. We were given a potted overview of the brewing process and a guide to how to taste beer (hold up to the light to appreciate the colour, swirl around and sniff and then taste. We were also given quite generous servings of the beers in question, which included two of my favourite beers - Schiehallion, a light, citrusy lager brewed by Harviestoun Brewery and Red Kite, a traditional real ale brewed by the organic Black Isle brewery, both these beers are Scottish.

Then I wandered round all the stalls, enjoying both the stunning sunny weather (we're finally getting a real summer!) and the wide variety of free samples of foods and drinks from a large number of mostly Scottish food and drink producers. My favourite items were (and this is where I didn't pay enough attention to detail, because I didn't note who made what): the raspberry, apple and mint fruit juice (what a wonderfully refreshing combination!); the ginger curd and the amazing seed bars. There was also a stunning array of delicious chutneys and jams, some of which were made of intriguing and unexpected combinations of ingredients.

After drinking my raspberry, apple and mint concoction in front of the music stage, I went to two afternoon sessions. The first featured comedian Lucy Porter entertaining us while making a simple warm salad, which featured too much chorizo and oysters for my taste, but it was all very amusing. The second featured the chefs from Gardener's Cottage, a new Edinburgh restaurant. was billed as 'how to make the most of East Lothian vegetables'. I wasn't the only vegetarian in the audience looking forward to that one. We were all disappointed to say the least, when the first recipe in this event featured fish and the second featured salami! The beetroot and ricotta salad was delicious though, but how difficult would it have been for the chefs to have featured purely vegetarian recipes given the title of their event!

Overall though, it was a thoroughly enjoyable event, made even more so by the weather and I'll be back tomorrow for more!

Sounds like a fun day and tasting the ale is fun too. I like to watch the Food Network on TV. There are amazing cooks, I just wish I could imitate them. Thanks for sharing your time at the food festival. Have a great weekend.

It does seem strange that they didn't stick to vegetarian foods since that was probably what many people were looking for at such an event. Hmmmm, ginger curd--I'll have to check into that!

Really good so far! I too have been seeing more and more "interesting" combinations of "fruits" made into jams and jellys! A couple evenings ago we finished a small jar of Jumbleberry Jam!

Ginger curd, seed bars, beetroot and ricotta salad, oh my! Thanks for feeding my imagination!

expecting some pictures of the food!!!

Well, the ale sounds like the only success of the day. I agree;it's amazing that there weren't many totally vegetarian dishes. What fun it must be to attend one of these shows. Enjoy yourself.

It does seem rather that the cheffy fraternity don't really take vegetarians seriously, even in a country like Britain where so many people are. Some Paris chefs apparently pick up vegetarian cooking and drop it again as a fashion thing, rather like couturiers might decide to make clothes only using black and white one season or something. Likewise with obsessive use of indigenous ingredients, to the point where they refuse even to use imported spices. There's no real philosophy behind it, just a pose.

Anyway, great fun to read about such an event, even more so to go, I imagine!

Eileen - I wish i could imitate the ease and style of the chefs!

Ashok - sorry, didn't take photos of the food. Most of it was in jars etc and not terribly photogenic, plus i would have needed to get in people's way to take the photos which wouldn't have been popular!

Carol - it was very meat oriented, but there were plenty of veggie foods to sample...

Lucy - it's irritating when chefs pick up on genuine trends and treat them as fads. I expected there to be a lot of meat dishes at the event, but was very disappointed that a session purported to be about veg, was full of meat and fish!