This morning Crafty Green Boyfriend and I joined a small group of other people for a socially distanced photo shoot to highlight the threat to Sauchebank Woods (you can read more about the woods in my recent blogpost here). 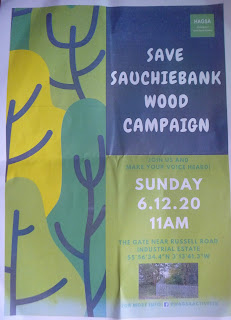 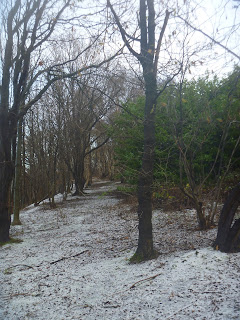 People aren't really protesting the cycle-path as such (green transport is a good thing!) but the decision of Edinburgh City Council that all the trees need to be killed for the cycle-path to be created. Surely it would be possible to remove just a few trees?

With members of Edinburgh Natural History Society, we looked at the plant list put together by the ecologists who claim to have surveyed the whole route of the proposed cycle-path. It was a woeful list, even just looking around on a winter's day we could see several species of plant missing from their list. Fungi weren't even mentioned and there's plenty of those around too (though to be fair probably most of them weren't visible when the survey was done). Here's an interesting fungus that Crafty Green Boyfriend caught on camera 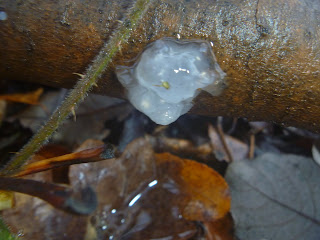 If all the trees are removed then the whole woodland ecosystem is damaged and if saplings are planted around the new cycle-path it will take decades for them to recreate the same woodland ecology.

A spontaneous litter pick was then organised and gathered together 12  bin bags of rubbish!

You can find out more on the Save Sauchiebank Wood Facebook Page.

Email ThisBlogThis!Share to TwitterShare to FacebookShare to Pinterest
Thinking about: green lifestyle, In and around Edinburgh, nature diary

I am listing fungi collected there and have started on the mosses. An invertebrate survey in the summer would be worth doing.

That's brilliant David. You're right, an invertebrate survey would be well worth doing.