Phat's Chance for Buddha in Houston by Virginia Arthur 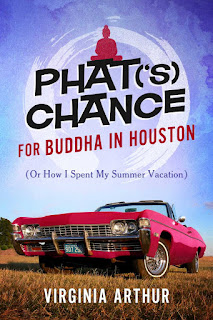 Set in the 1990s, Phat's Chance is a coming of age novel and a road trip, narrated by Galen, a boy from a large family, who's travelling across the US with his eccentric Uncle Phat, a much misunderstood intellectual:

"while he probably would have made a great copier repair guy, Uncle Phat liked to talk but not just any talk,"literary talk" as my mom put it, intellectual stuff, philosophy, politics. Every time Dad sent him on a job, instead of fixing the copier, somehow he'd always find someone to "get literary" with meaning he would end up spending most of the time in some kind of discussion. Inevitably, Dad would get a call from the client the next day not to send the same repair guy."

On their trip, that Phat claims will 'exemplify Buddhism', he introduces Galen to the natural world, American history and the pitfalls of capitalism, while ostensibly looking for a new motor for their car. Uncle Phat is interested in everything and his way of thinking opens up new mental horizons for Galen just as their drive through America opens up new geographical horizons. On the way they meet up with locals, some of whom are losing their livelihoods to out-of-town malls, survive a road accident and a terrifying tornado. Galen gets drunk for the first time in his life and turns 16.

This is a very readable short novel (129 pages), moving, thought provoking and amusing in turn. Galen and Phat are both engaging, believable characters and Galen's coming of age is nicely contrasted with Phat's mid-life crisis. An easy read that will make you think - an ideal holiday read for the current times!

Phat's Chance by Virginia Arthur, can be purchased from the links on the author's website here.

Disclaimer: I received a free e-book of this title in exchange for an honest review.

Crafted by Crafty Green Poet at 8:00 am

Nice review - never read it but will watch for a copy floating about! I received two large books of local lore this season and so have a big backlog!!! Have a fine Holiday Season there - I am not any more sure which side of the Atlantic is having the strangest one!

Hi Rabbits' Guy sounds like you have plenty to read over the holidays! Hope you have a good one too, and you're right, very strange both sides of the ocean!