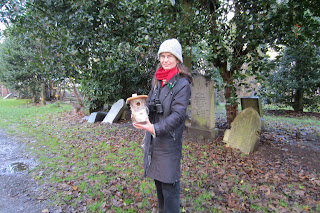 Today I met with another member of the new Friends of North Merchiston Cemetery group and a forestry officer of Edinburgh Council to put up some bird boxes in the cemetery. The bird boxes were donated by the Friends Group for the nearby Dalry Cemetery. There are two blue tit nest boxes which are now sitting in silver birch trees 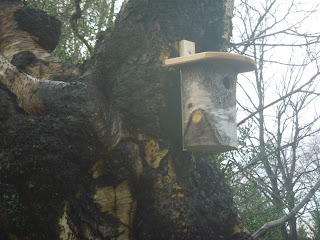 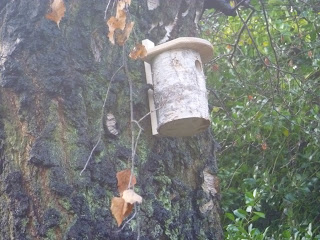 We will be following the progress of any bird families that set up home in these boxes. To help make sure I pay attention, I've chosen the second birch tree as my tree for Tree Following next year. It's one of several old gnarled birches in the cemetery 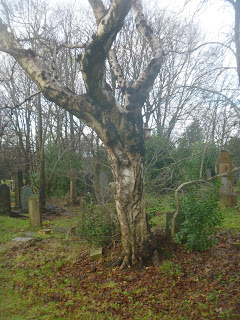 The third nest box is a robin box, which is now hidden away in a holly bush 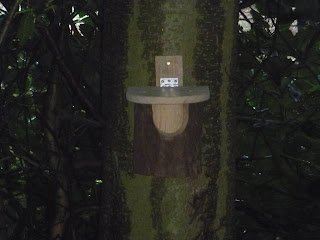 There's also an old owl box in the cemetery, though it doesn't seem to have been used.

As well as putting up the bird boxes, we discussed the trees in the cemetery. There is a Tree Preservation Order that covers all the trees in the cemetery. This means that no tree work can be done without the express permission of the council. The council will only remove trees or large branches for health and safety reasons and will aim to keep a sizeable remnant of trunk to allow for wildlife habitat. as is the case with the tree where the great spotted woodpeckers nested this year 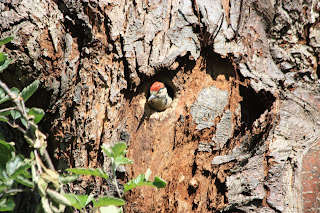 Apparently it seems unlikely that the woodpeckers will use this hole again, as it generally seems that most woodpecker holes are then used by different species the next year. It will be interesting to see what nests in this hole next year!

Sadly, there are a number of mature ash trees in the cemetery which have ash die-back disease. This disease, which is predicted to eventually kill around 80% of the ash trees in the UK,  is often found first in young trees which then spread it to older trees. If a mature ash tree develops die-back then eventually it's upper branches will be entirely hollowed out, meaning that they are at risk of falling and are too weak to allow for tree surgeons to climb up them. If the tree is close to paths then the diseased upper limbs will need to be removed while it is still safe to do so, so sadly some of the ash trees in the cemetery will be cut right back in the near future. The forestry officer also showed us two large branches that overhang the path (one of which overhangs the nearby road) and are very decayed and will soon become hazardous, so these will also be removed. Also trees that are growing through the boundary wall where the cemetery overlooks the railway line will be removed to allow a secure wall to be rebuilt and avoid future stone-falls onto the train tracks.

As ash trees and others are removed where necessary, other trees will be planted, probably rowan, elder and hazel, native species that won't grow too tall!

While we were walking round, the forestry officer pointed out that the horse chestnut tree that I've been following for Tree Following this year is infected with bleeding canker! 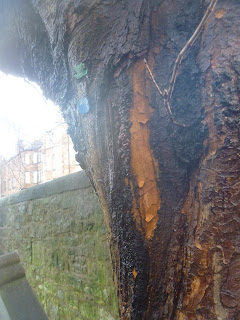 This doesn't pose an immediate threat to the tree, which won't be removed, but it is something that we need to keep an eye on!

Pleased you were able to get the bird boxes put up.
However, sorry to read that a number of mature ash trees in the cemetery have ash die-back disease.
It seems that the Forestry Officers/Edinburgh Council are keeping an eye on things though, which is good.
Enjoy the coming weekend.

What a great project to be involved with....Michelle