The End of My Tether by Neil Astley 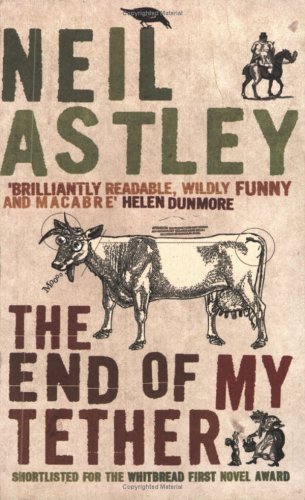 Neil Astley, as editor of Bloodaxe Books, has edited all my favourite poetry anthologies, but until recently I had missed the fact that he had written a novel (in fact I just found out he's written two!). The End of My Tether is a big, sometimes brilliant and sometimes downright weird novel.


The plot centres on the murder of Bernard Tench, a whistleblowing scientist who knew too much about BSE. Kernan uses songs and folklore for guidance and brings on board allies both animal and supernatural against the sinister Superintendent Goodman to uncover all that's rotten in the state of England.

The cast includes characters who are reincarnations or have been alive for hundreds of years either in human form or in the higher state of being that is a Zen-like farmland cow or sheep. The book weaves in loads of references to folk tales and environmental issues and is complex and engaging until it all becomes too much and starts to fall apart a bit with a lot of disjointed ideas. Some of these ideas are brilliant like the image of Hell as an enternal supermarket queue and others are less so, such as the woman giving birth to a wash basin....

It's a thought provoking read for anyone interested in how we treat animals but possibly an annoying one for those who prefer their crime novels to focus on the crime in question! (I'm not a crime fiction fan by the way and didn't read this novel for the crime!)

The End of My Tether by Neil Astley published by Scribner.

I'm not really into weird! I like a good murder mystery that takes me into another world!