Today I visited Levenhall Links, the bird reserve at the Musselburgh Lagoons. The area is also part of the Firth of Forth European Special Protected Area (SPA). SPAs are part of the vital European Union Nature Directives, which help to prevent our vital wildlife areas from being destroyed by inappropriate developments. (I've written about the environmental element to the EU Referendum here). 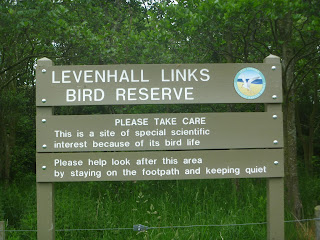 I visit this reserve regularly and in fact it features in my first post for 30 Days Wild, which you can read here.

There are three hides on the reserve, and I like to spend time at each window, with a cup of coffee, using my binoculars to scan the lagoons. 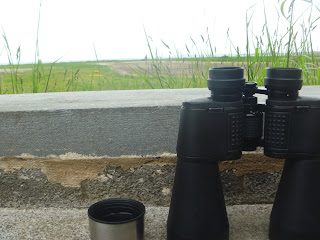 As you may be able to see in the photo above, the lagoons are currently empty of water, as they're being drained for their annual maintenance. That doesn't mean nothing was happening though! A whitethroat was singing beautifully as I sat there so, thinking of BBC Springwatch's Twitter challenge to write a 140 character poem I came up with these lines:

The warbling of a whitethroat
heralds the appearance of a stoat!

I wasn't happy with this, the rhyme feels forced and in the spirit of 30 Days Wild I wanted to write poetry that came straight from my nature observations. So I left the hide musing on what to write instead, when something amazing happened!

A stoat jumped in front of me! Then it jumped back into the undergrowth but just to prove I wasn't imagining things it then jumped back onto the path then away! U have never seen stoats here before! So the poem became reality!

**
When we were in Shetland recently we visited two wonderful nature reserves.

On the Tuesday we visited Loch of Funzie on Fetlar, the RSPB reserve for red necked phalaropes (the UK's rarest breeding bird, shown on the information board in the photo below). 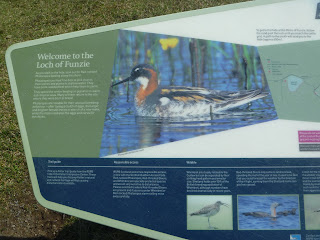 Unfortunately we didn't see the red necked phalaropes and it seems that we were probably a week too early, as they hadn't yet arrived from their wintering grounds (well that just gives us an excuse to go back to Shetland!). However we were delighted by the snipe, which were flying into the air and drumming with their tail feathers, a wonderfully haunting sound that came to define the moorland areas of Shetland!

On the Thursday we went on the dusk boat trip to the island of Mousa to see the storm petrels. 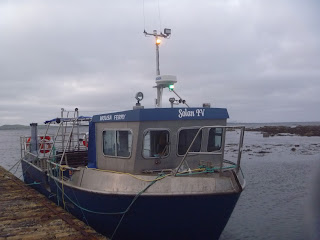 The dusk boat trip out to the island was quite bumpy then we walked along the rocks at the top of the beach. We stood and listened to the calls of the storm petrels from under the rocks, it really was quite amazing! The birds were also calling from the stones of the dry stone walls that run across the island. Our final destination was the broch, an iron age tower, which is now home to a large population of storm petrels. When we arrived there, we walked round the broch, listening to the birds calling from in between the stones then birds started flocking in until we were surrounded by storm petrels circling the broch, calling in at their nests and circling again. Flash photography isn't allowed around the birds and without the flash, photos wouldn't be useful! So that's a real excuse just to enjoy the moment! It's a wonderful experience and I definitely recommend it if you ever visit Shetland in the summer!

What are your favourite nature reserves?

because of the small area we live in the nature reserves we visit doesn't have hides. i wish they did though. that would make viewing some of the wildlife there a bit easier. loved your poem... sounds like you've been quite busy with 30 Days Wild. hope it continues to be productive. have a great night~

Several in our area. Today I was at the Padilla Bay National Estuarine Research Reserve AND the Fidalgo Bay State Aquatic Reserve! Rich diversity of marine life.