Listening to Birds for 30 Days Wild 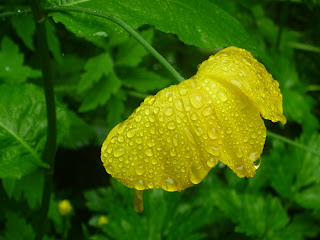 It was another dull and damp morning today, but I set off for my weekly volunteering session anyway! (You can read more about my volunteering here). As I waited at the bus stop I watched 11 swifts flying round, shrieking occasionally as they went! Colinton Dell along the Water of Leith was full of birds singing and calling! I heard: blackbird, song thrush, robin, blue tit, bullfinch, dipper, blackcap, chiffchaff, chaffinch, wren, jackdaw, woodpigeon and buzzard. If you click on each bird's name in that list you'll be taken to the appropriate page on the RSPB website where you can find out more about the bird, including the chance to listen to a sound file of the bird's song or call.

Birdsong is beautiful to listen to, it's wonderful to be in the woods, surrounded by the different songs and calls. Some people find it difficult to identify birds by their songs and if that's the case for you then don't force yourself to try to learn the songs but just enjoy them! If you can learn them though, it can add an extra element to birdwatching. You may be able to hear birds that you can't see and get a more complete picture of what's around. You can tell the difference between certain tricky species much better by song (the chiffchaff repeats its name over and over, while the willow warbler has a lovely cascading warble, yet if you try to tell them apart you need to be close enough to tell that the willow warbler has pale legs while the chiffchaff has dark legs, oh and the willow warbler has longer wings as it flies further on migration, but that can be even harder to see!).

This is one of the best times of year to listen to birdsong, at its very best if you get up earlier enough to hear the dawn chorus! But even during the day in a woodland (specially after rain!) there can be a lovely range of song and there's often a lovely dusk chorus too. Birds sing at this time of year to mark out their territory and to attract a mate. So outside the breeding season most birds don't sing (other than robins, where the male and female both sing in the winter). Birds call to each other all year of course so you'll still hear them!

The best way to learn birdsong is to start in January and listen to the sound files on the RSPB website. Then when the birds start singing (which can be as early as February for some species) you can go out and hear them. Hopefully you'll have got your ear in a bit for the resident bird-songs before the migratory birds arrive and start singing later in Spring!

Email ThisBlogThis!Share to TwitterShare to FacebookShare to Pinterest
Thinking about: birds, green lifestyle, In and around Edinburgh, photos, Spring

I love all the birdsongs! I love the little black capped chickadee. A friend taught me that they are saying, "Hey sweetie! Hey sweetie!" So, I hear that when they call. :)

I love the song of a single blackbird on a dark early winter morning, usually late January, early February, around St Brigid's day (Imbolc). These lone singers are always the first, marking their territory with song.
For me, it's the beginning of spring, of new life.

There is a lovely expression in Japanese "shinobi-ne" that refers to the muffled, almost whispered, birdsong of the Lesser Cuckoo in early spring. It seems to be practice singing, maybe practice towards courtship song later in the season. The expression shinobi-ne itself has a nice feel to the ear, and is used in ancient poetry for secret, muffled sobs caused by heartbreak or homesickness, etc. I myself have suffered from loud ringing in the ears ever since I injured my back in my mid-twenties, and it's hard for me to make out subtle difference in birdsong. But I love the idea of it.

i love to hear birdsongs. i can't identify many birds by their songs but i do enjoy the ones i can such as the eastern meadowlark or red winged blackbird. i definitely can't forget the kill deer. i don't think it's as much a song as it is a high pitched sound. no mistaking their sound for another bird. hope all is well. have a great night~

The varied thrush in the early spring. Now the Black headed grosbeak - sounds like a drunken sailor!

Lovely image!
Have a nice week!

Hi Deb, what a lovely expression and a lovely way to use it in poetry too! A lot of birds have subsongs, I think you're right about it being practice. Sorry you have the ringing in the ears.

I can only identify the commonest or the most distinctive birdsongs, but that doesn`t take away the pleasure of just listening.
I love the thought that town starlings now mimic urban sounds so much that they have a different song to their country cousins!