Springwatch started again on Monday and will continue for the next three weeks! It's an excellent programme, currently filming from the RSPB's Minsmere nature reserve. Cameras are set up across the reserve to bring us news from various bird families, including avocets, blue tits and sparrowhawks. Film crews are also dotted round the UK to bring us news from a golden eagle's nest in the Scottish Highlands and puffins on the Farne Islands. There's also some excellent footage of rabbits! The programme includes an excellent mix of science, nature observation and activities to get involved in, including the chance to take part in wildlife surveys. Then there's Springwatch Unsprung which features creative guests, who bring their perspectives from the arts to bear on nature and the environment. So these are two programmes that I'll be watching over the next couple of weeks!

It's a great chance more than anything to get up close to nature that you wouldn't otherwise see.

We had a few moments in our visit to Shetland which felt like Springwatch moments. One being our encounters with puffins at Sumburgh Head. Another was our amazing sighting of an otter on the small island of Bressay. We first noticed the otter as it was diving in the water, then it emerged with a crab in its jaws which it then took to a rock and started to eat. Once it had finished eating the crab it dived back into the water and came back up with a fish! Crafty Green Boyfriend managed to catch it on film (click on the image for a closer view) 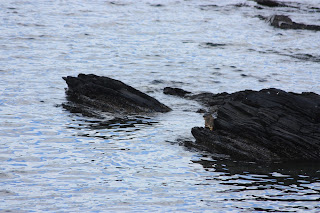 We later discovered that wildlife cameraman and presenter Simon King (who has worked with Springwatch, but possibly for another programme on this occasion) was on Shetland at the same time as us. Perhaps the otter thought that Crafty Green Boyfriend and I were part of the film crew! It was a wonderful lengthy sighting of what is often a very shy animal (also in coastal settings usually an animal that only comes out at dusk, so particularly amazing to get these views in the middle of the day!).

***
And for today's moment in the outdoors, I was appreciating the wonderful flowering trees and shrubs, including this lovely hawthorn 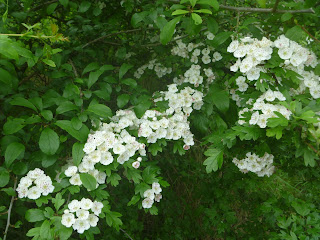 Hello, the hawthorn is pretty, lovely blossoms. Happy Thursday, enjoy your day and weekend ahead!

How wonderful that you got to visit the Shetlands and I enjoyed seeing your photos. The hawthorn flowers are pretty and loved seeing the coastline.
Happy weekend
Hugs
Carolyn

I liked the Springwatch piece on rabbits too. Although the eagles etc. are magnificent, it's so good to find out more about everyday animals. It must have been so exciting to see the otters.

Nice - wish I could see that program! Lovely hawthorn.

A lovely post, Juliet. Our otter sightings in Scotland and at Minsmere over the years have been either in the middle of the day or in the early evening. Well done, CGB!