At last some butterflies

We've been having a cool, dull summer so far, poor weather for insects, particularly butterlflies. Today though is warm, even hot and the sun is shining. 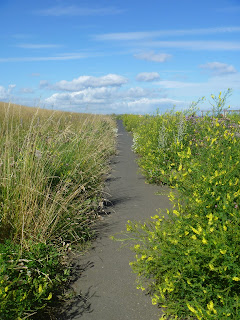 It is buzzing with bees and smells of honey. Lots of butterflies too, large whites, small whites, ringlets and meadow browns. None of which allowed me to take their photo, but it was delightful to watch their dancing. I was intrigued on a couple of occasions to see ringlets chasing small whites.... I'll be adding my records to the Big Butterfly Count. which is running until 9 August.

Up above the grassland (to the left of this photo) a kestrel was hunting, briefly it was chased by another kestrel, then it went back to hovering again. I've seen kestrels here almost every week this year and very rarely in previous years. 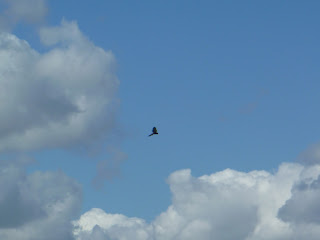 The thistles are starting to lose their downy seeds already 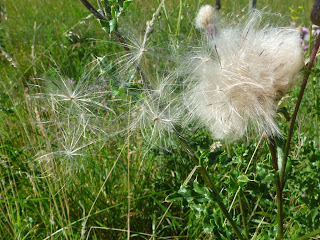 and most of the poppies have become seedheads 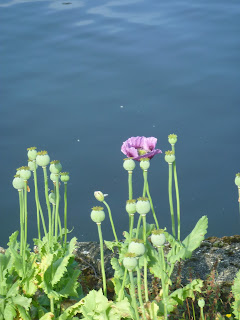 Meanwhile Treacle is also enjoying the sunshine, when he's not chasing things round the house or sleeping 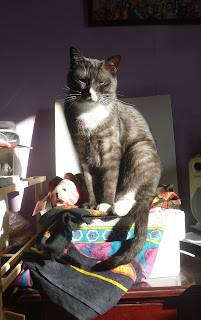 Email ThisBlogThis!Share to TwitterShare to FacebookShare to Pinterest
Thinking about: In and around Edinburgh, photos, summer, Treaclethecat

Hello, the walkway looks pretty. I am happy that you are seeing the butterflies there. Lovely collection of images and your kitty is cute! Happy Friday, have a great weekend!

Any white butterfly is a pain in the backside to photograph, they never stop flitting! Clouded yellow are the hardest, they fly like spitfires!

Treacle is such a happy show-stealer! I'm glad your butterflies have come at last. Minsmere was awash with ones that love Buddleias last w/e, including a Painted Lady. Our garden has large and small Whites - very skittish!

A cat can find a spot of sunshine like I can find a Snickers candy bar!

So good to see the butterflies... and nice to see Treacle enjoying the sunshine too!