A few things about Treacle the Cat 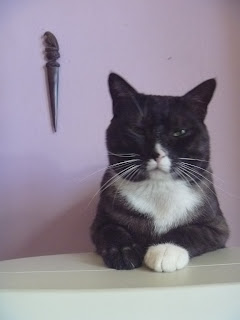 Treacle our Cat is a very special cat. He's a two and a half year old rescue cat from the Edinburgh Cat Protection shelter in Leith, which has a small cattery housing several cats and kittens. Treacle had apparently been a bit of a bully in his four months there, always chasing the other male cats! With us though he is adorably affectionate and very fun loving.

He's a very beautiful cat, his dark grey fur has black tabby markings running through it, but if you run your hand through his fur, it's white underneath. He has mismatching paws - two short white socks, one long white sock and one entirely grey leg! His wonderful colouring really shows up when he lies in the sun. 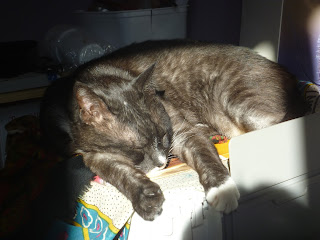 Originally Treacle came from Tunisia! The shelter don't know really how he got from Tunisia to Edinburgh.....

Treacle likes to drink water from a tap or from a mug, rather than from a bowl. He sometimes uses his paw to eat. He loves playing, today he spent about twenty minutes pushing round a small piece of carpet (which we hope he'll use to scratch on) trying to find a ball we'd made from reused aluminium foil. He likes to 'help' me as I weave oblongs for his cat blanket.He prefers to play with the wool that I'm working with, rather than the ball of wool I've given him specially to play with..... 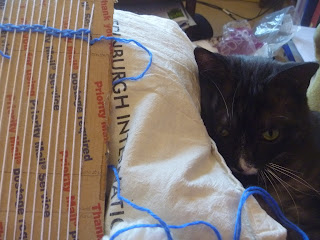 We'll be keeping him as an indoor cat as we don't have reliable access to a good garden and we live close to a busy road.  Indoor cats apparently live longer and are (obviously) less likely to be run over, attacked by other animals, kidnapped or pick up illnesses. They're also much less likely to kill local wildlife.
Crafted by Crafty Green Poet at 1:20 pm

Email ThisBlogThis!Share to TwitterShare to FacebookShare to Pinterest
Thinking about: Treaclethecat

Hello, Treacle is a sweet looking kitty. I like the different colored paws. So happy you rescued your kitty and that he will be an indoor cat. Happy Friday, have a great weekend!

We had brother and sister cats who would eat from tins with their paws like Arthur. One was left handed, the other right handed!

I had two rescue kitties - both with great personalities. Treacle is a beauty - very dignified - love that first photo!

What an interesting life history, Treacle. Perhaps you will invent some of his unknown former adventures, Juliet: I feel he is a cat with quite a story to tell!

Sounds like both you and Treacle have made a wonderful connection. He has no reason to bully now, as he has found home, and seems very content with his life :)

(I just found out Henri is a Seattle cat! In the videos he "speaks" in French!)

Simon - that must have been cute to watch!

Lynn - Caroline - yes we've been wondering about his past too and I'm sure there are lots of stories in there!

He looks super confident...... Wonder who the boss will be in your household now.:-)

Hi Captain - indeed, we have a new overlord in our household!

In that first photo, he looks like a cat with an attitude, but then that goes without saying for all cats seem to have an attitude. But they're fun to have around.

Some lovely photo's of Treacle, and great to learn more about him.

Hi Juliet,
I just caught up on reading blog posts today so I just came across this one all about Treacle. He seems an absolute delight. They add so much to life, don't they?
:) m & miss josephina ballerina xoxo (for some reason she insisted I type her full name)