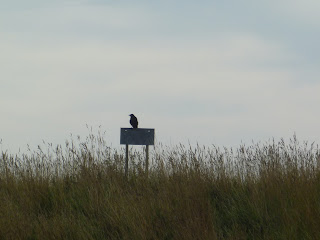 Lothian Birding announced on Twitter this morning that a spoonbill had been seen at Musselburgh. This is even more exciting than the avocets that I saw at Musselburgh a couple of months ago. The avocet is a bird I had always wanted to see, the spoonbill is one I had never even thought I'd ever get a chance to see. So off I went to Musselburgh. 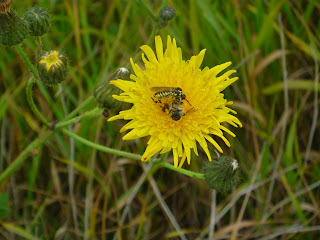 Anyone know what that green stripy insect is? There were plenty of them about, but most of them seemed to be eating plant material, unlike this one that seemed to be eating a dead bee. Lots of hoverflies about too, at least three species. Too speedy to catch on camera unfortunately but fascinating to watch!

****
Meanwhile, thanks to Hannah Stephenson for posting my guest post on writing, crafting and procraftination on The Storialist.

I'm in the same position with an as yest unspecified bird (I want to keep it a surprise for when I get a photograph). A neighbour tells me there are two of these who frequent the creek directly across from my home.

I wish I knew what those stripey bugs are; they do look familiar.

Better luck on your next spoonbill-scouting trip!

Unfortunately, the photo of the stripy insect comes up too small on my screen to get a good look at it. It is some sort of hoverfly or more like a wasp?

Nice post by the way. I enjoyed reading it.

Hopefully you get to see a spoonbill soemtime soon. The bird that I've always wanted to see is the Scarlet Tanager. I have yet to see it, but I haven't given up hope :)

no idea, but it is pretty.

I do hope you get to see a spoonbill soon. They're so plentiful in my part of the world, it's commonplace to see them. And they ARE pretty even if the beak/bill is odd.

I have no idea what the insect is.

Hope your weekend will go well.

Juliet - Try Stuart at Donegal Wildlife for the identification of that insect - he is marvellous at identifying such things. His blog is well worth a visit.

Great outing, but I am sorry you missed the Spoonbill! Love the photos. Have a happy weekend!

If there had been a spoonbill, would it have measured up to the spoonbill of your imagination?