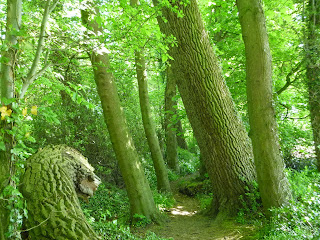 We went on a lovely walk today through Cammo Country Park and along the River Almond to the sand martin colony. The weather was gorgeous and there were orange tip butterflies everywhere 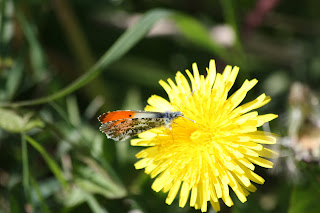 and a few peacock butterflies too. 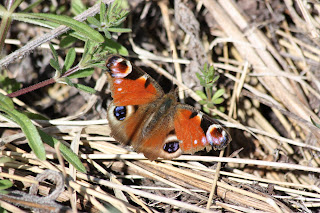 there were also several of these bright little beetles in amongst the white dead nettle plants. 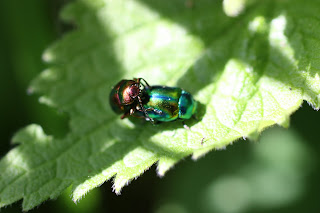 In Cammo and along the early part of the riverside walk, the path is through woodland and the blackcaps were singing their lovely rich song, chiffchaffs were calling their name loudly and other woodland birds were singing too. The later part of the riverside walk passes much more through scrubland. There were loads of whitethroats here, singing loudly and displaying too, with their short steep songflights. There didn't seem to be as many sand martins as we've seen here in previous years, though I've been pleased to read (via Twitter) that just up the coast from Edinburgh, Montrose Basin has 3 times as many sand martins this year as it had last year!

We sat and ate lunch by the river, just downstream of the railway bridge (see the photo below for Sunday Bridges), surrounded by singing whitethroats and yellowhammers and the occasional willow warbler. A kingfisher few past us as we ate our sandwiches! 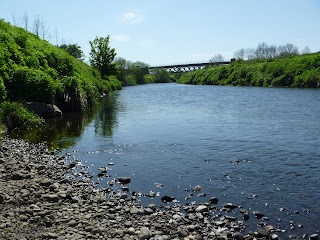 Butterfly photos by Crafty Green Boyfriend, the rest are mine! Most of them contain shadows for Shadow Shot Sunday


As ever, red text contains hyperlinks to other webpages where you can find out more!

Your world is lagely green but the creatures give it color, all in a world of shadows.

So lovely, Poet. I can almost hear the birdsong, rustling breezes, and trickling water that must accompany these images.

How lovely, Juliet. And you have butterflies. Wonderful! We don't even have leaves yet, here on the bald prairie, but we do have some kind of bugs flying around.
— K

The soft green all about the river walk looks like the warmth of spring inside the woods. The simple flowers and solitary insects exemplify the simple and beautiful things we see on our travels are the things that look outsized ib their good looks. A tay to walk and enjoy the simplicity and beauty of nature...

The soft green all about the river walk looks like the warmth of spring inside the woods. The simple flowers and solitary insects exemplify the simple and beautiful things we see on our travels are the things that look outsized ib their good looks. A tay to walk and enjoy the simplicity and beauty of nature...

Beautiful photos! I love the first shot and the one of the beetles. I haven't been to Cammo Country Park but am looking it up now. :)

great photos...you have a little bit of everything here!!!!

A SEEKER OF SHADOWS

A seeker of shadows, they say,
Will keep her eyes peeled night and day
For resident shades
That haunt the dark glades
And never come outside to play.

What a wonderful walk that was! Thank you for sharing it. Love the butterflies and the absolutely beautiful green everywhere.

It looks lovely there! Those beetles look a bit like lavender beetles.

How beautiful and peaceful. Green just makes one feel so alive and refreshed.
xx, shell

That first photo is especially lovely - a peaceful green corridor.

It was lovely to see where you went walking and what a beautiful place.
I really loved seeing the pretty butterflies and bugs.

My Shadow Shots, have a blessed Sunday!

I'm just astonished by the green in that first photo. Is it a trick of the light, or is there so much moss about? I need to read more about your climate - perhaps you're more like our Pacific Northwest, damp and warm enough in winter to maintain that rain forest look.

I can't get over how green the wood is in the first photo. Great stuff CGP.

Mmmmmmmmmmmm, would I ever have loved to be going with you on this trek! So beautiful.

Have a glorious Sunday. If you find time, your visit with me today would be much appreciated!!

sounds like a delightful day as you describe it...your photos center us in your experience.

sounds like a delightful day as you describe it...your photos center us in your experience.

You live in a lovely, peaceful country! Your photos are excellent, thanks for the tour.

tiojLove the variety of the shots this week....butterflies, beetles, water, forests....almost too goo to be true. This series show us just some of what Mother Nature has in store for us during our lifetimes. Wonderful shots. So interesting, and I learned about some butterflies I did not know existed.

I'ml online for a few minutes!! Trying to catch up.

Great combination of shadows and an excellent bridge. I think I'd like to get close to that bridge.

Looks like it was a great day for a walk! Good job at photographing the wildlife you came across, too. Cheers!

Thanks for taking us along. What a lovely celebrTion of nature!

You certainly go on many lovely walks and it's lovely to share them with you ~ some very scenic spots, and lunch by the river must taste even yummier!

The close ups are really so very good. Everything looks so peaceful, I can see why you visit.

Lovely walk, CGP. In that first pic the broken tree on the left looks almost human! A tree sprite perhaps?

Lovely nature walk...good for the peace of mind....