I had a lovely wander through the Dells along the Water of Leith today. The one drawback was the amount of litter, I collected two big bin bags full and that wasn't even all there was. It wasn't helped by the fact that the bins were overflowing. It was a lovely day though. Most trees are definitely spring like. The exceptions being some of the ash trees, which look distinctly wintery still: 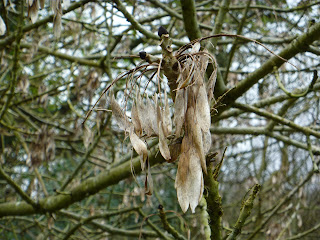 The wych elms are fruiting already: 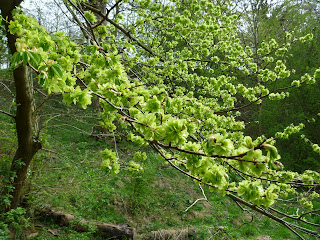 though some of them are between flowering and fruiting: 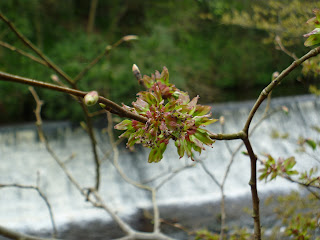 The hornbeam that I'm 'studying' for Tree Year is definitely further on than it was last time I shared a photo. Thes catkins by the way are the male catkins, the female chandelier-like catkins won't appear until later in the year (and they're worth waiting for, they're lovely). 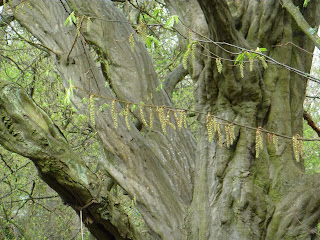 The birds were singing beautifully, the blackcaps are now in full voice. I had my best ever view of a singing blackcap this morning in fact. Plus there was a group of about four or five chiffchaffs chasing each other round a stand of birch trees. And I found this segment of egg shell that had been dropped by the side of the path. The parent birds always take the broken egg shells away from the nests when the chicks hatch so that predators aren't drawn to the nest. 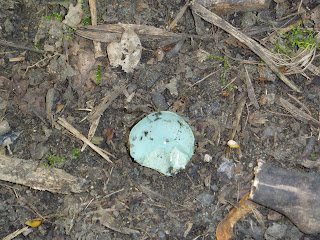 STV North Edinburgh yesterday interviewed me about the course I teach about the Water of Leith for the University of Edinburgh Office of Lifelong Learning, you can read the interview on their website here.

For Nature Notes.
Crafted by Crafty Green Poet at 3:26 pm

Email ThisBlogThis!Share to TwitterShare to FacebookShare to Pinterest
Thinking about: In and around Edinburgh, nature diary, Tree Year, Water of Leith

I shall really have to visit that Water of Leith one day Juliet - each time you write about it I find the name so beautiful.

As for litter - it is everywhere down our lane too - so distressing that people have no thought about dropping it.

I love your tree posts! I too am so sorry about the litter. When I was growing up in Ohio..the fines for littering were huge and we were taught by our parents and schools never to litter. As a family we hiked all over and rarely saw litter. To this day I cannot toss my gum out the window of the car...I have a bag for that! But here in Utah where they talk a lot about stewardship of the land..the litter is horrifying.
My irrigation ditch is full of trash..which is waiting for a dryer day so I can get in there and clear it out. I have a lovely neighbor who walks every nice day with a trash bag and fills it. Too sad.

So sad when people litter and do not care about what they are doing.
I enjoyed seeing your wonderful part of the world and what lovely trees.

Fine website/blog for the course - I had not seen it before.

Some group needs to apply for a grant to survey who litters and why, and how to target the different types!

Such a beautiful place! Why people have to litter is beyond me... the beaches here are filthy again and the desert areas where the people camped during winter are full of furniture and trash.
The world is a sad place in that regard.
All on can do, is pick up pieces and enjoy mother nature along the way, I guess....