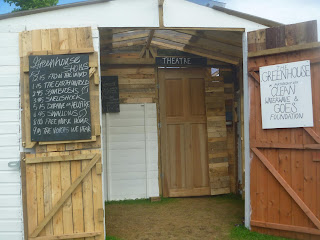 Swallows is showing at the Greenhouse recycled pop up theatre in the grounds of Dynamic Earth as part of Edinburgh Festival Fringe.

It's a cautionary tale of eco-terrorism, with Tim (Issy Sheridan) a young man being drawn into an act of eco-terrorism with Harry (Daniel Jonusas) and Ella (Sarah Chamberlain), without him or the audience knowing anything much about what is actually going on.

I found the first part of the show quite tedious to be honest, as there was too much explanation of issues without any real narrative drive but the tension eventually starts to build very impressively (with at least one audience member seeming genuinely scared by the weapon being wielded by Harry  - and this is a very small theatre with the audience right next to the actors, so it did almost feel like we could be hit, though obviously no-one was). The climax of the show is gripping with sound effects from outside the theatre adding to the action going on in the space.

An interesting exploration of how people can be drawn into extremism which asks the vital questions - how far would you go to protect what you love?

A nice extra touch was that real swallows were flying round above the theatre before the show. Wild swallows with no connection with the production.

Swallows showing  August 2—26, 18.45 - 19.45 at Greenhouse Theatre, in the grounds of Dynamic Earth as part of the Edinburgh Fringe Festival.

Other plays are showing at the Greenhouse, including

Crafted by Crafty Green Poet at 8:58 am

Not seeing as many swallows down by the local park as in other years.

We don't have enough cultural stuff in this town

Hi Simon - fewer swallows here than usual too, except in slightly unexpected places like mentioned in this blogpost.

Edinburgh has too much cultural stuff at this time of year, so much it's difficult to know what to go to.