It's Wintry Out There!

It was beautiful at Musselburgh today. This is the view towards the Mouth of the River Esk where it meets the Firth of Forth 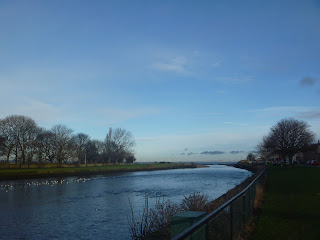 The goldeneyes were already performing their courtship dances (the males throwing their heads onto their backs) but they didn't let me photograph that. 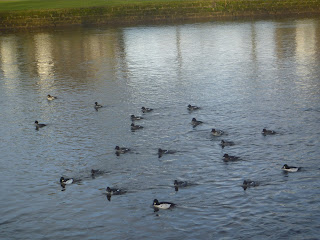 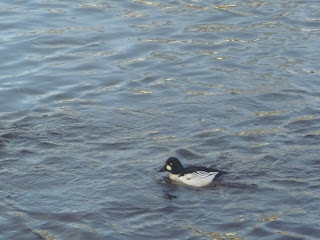 Despite the cold and remains of the recent snow, all the paths were free from ice except the paths round the hides at the Lagoons. The views from the hides across the lagoons were very wintry 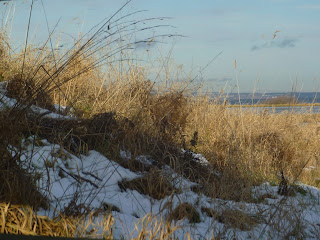 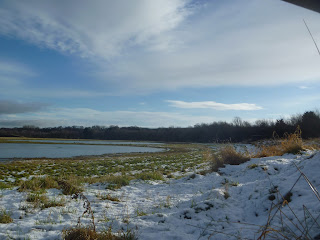 There were a lot of teal on the lagoon behind the grass in the first photo. Like the goldeneye they were performing their courtship dances but too far away for me to hope to get a photo so I just enjoyed watching them through my binoculars. The male teal is a beautiful bird and shows off his colours most magnificently during his courtship display.

The only wader I saw from the hides  was a curlew though there were impressive numbers of oystercatchers and a few other waders near the mouth of the Esk on the shores of the Forth. If you're interested in knowing more about British wading birds then it's worth checking out the WaderTales blog, which is full of interesting articles.

Email ThisBlogThis!Share to TwitterShare to FacebookShare to Pinterest
Thinking about: birds, In and around Edinburgh, winter

Hello, great sighting of the ducks. I would love to see the Goldeneye!

Enjoy your day and weekend ahead.

The oyster catcher is one of my favourite birds. I could watch them all day.

Lovely. We still have three months of winter left, but I have noticed a difference in the birds here.

Never seen so many goldeneye in one shot!

The snow reminds me of a sandy beach! Lovely birds.

What beautiful photos of the winter land(and sea)scape, Juliet. Goldeneyes are such fun to watch, though I haven't seen one for some months. No snow here, but dreadful gales this morning, with debris flying around.

It's wintry out there, and all so nice indeed.

What a lovely collection of photographs ...