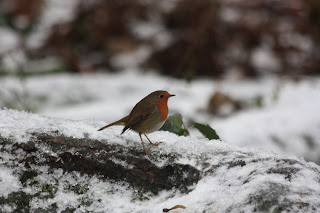 robin, one of the most familiar of British garden birds

I grew up in suburban Manchester and loved watching the birds in our garden. There were blackbirds, song thrushes, robins, blue tits, great tits and lots and lots of house sparrows and starlings. My Dad still lives in the same house and the garden is still full of birds. The species have changed though, there are now lots of goldfinches (attracted by the nyger seeds Dad puts out for them) and a lot more crows, including the occasional jay (my best ever view of a jay was in this garden a fewyears ago) and lots of magpies. House sparrows have declined in the garden (as they have across most of the UK). While Mum was alive, my parents always took part in the Big Garden Birdwatch, but often complained that the most interesting species didn't turn up that day!

As an adult, I have mostly lived without a proper garden. When I lived in Malawi we had bougainvillea growing over our verandah and a small vegetable patch outside under a papaya tree. A fish eagle lived in a tree behind our garden and several birds visited, including a beautiful kingfisher who must have lost its way from the nearby Lake Malawi (though it wasn't a pied kingfisher, which was the prevelant lake species, in fact I never found out what species it was though suspect it was a malachite kingfisher). Also in Malawi, though in someone else's garden, I saw the only hoopoe I've ever seen (though there was a rumour when I was a student that a hoopoe visited Edinburgh every summer).

Where we live in Edinburgh there's a pretty bush in front of the garden where a dunnock skulks, sometimes joined by blackbirds (who sing beautifully in the spring and summer) and a robin. Behind our building there's a shared backgreen with a vegetable plot, surrounded by some well looked after gardens and some bramble patches. Some of the neighbours put out bird feeders. I've seen several species out there, robins, blue tits, song thrushes and dunnocks. One Christmas Day 50 fieldfares appeared from nowhere and took over the whole backgreen then next day had disappeared again. In summer, swifts constantly fly about over the nearby roofs and nest in nearby buildings.

Unfortunately we can't see our backgreen from our flat and there are no comfortable sitting places there so it's not ideal for a winter birdwatch. But if  you don't have a garden for the Big Garden Birdwatch, you can still join in. Just go along to your local park and record the birds you see there. It's fun, good exercise and you'll be helping the RSPB to keep up to date records of birds in the UK.

The Big Garden Birdwatch offers the chance to get to know your garden birds better and also to feed your observations into the national survey. Over half a million people now regularly take part, which combined with over 30 years worth of data, means that Big Garden Birdwatch enables the RSPB to monitor trends and to understand how birds are doing in the UK.

So make yourself a cup of tea, pull your chair up to the window, get your binoculars out and start counting!

And if you are interested in recording your bird sightings all year round, then you can enter them onto Birdtrack.

As ever, text in red contains hyperlinks that take you to other webpages where you can find out more.
Crafted by Crafty Green Poet at 8:39 am

Email ThisBlogThis!Share to TwitterShare to FacebookShare to Pinterest
Thinking about: birds, green lifestyle

I think I am going to take part for the first time ever this year, if I can organise myself (unlikely!) - the thought of having a fish eagle living in your garden is quite something!

Hi Simon, it would be great if you could join in! And yes the fish eagle was amazing.

The RSPB usually get a good number of folks to do this ...