Crafty Green Boyfriend's mother recently gave me some modelling clay and I  thought it might be nice to combine it with some of the sea pottery I have to decorate photo frames and mirrors. So I bought some cheap frames from second hand shops and started to experiment. This is the first frame 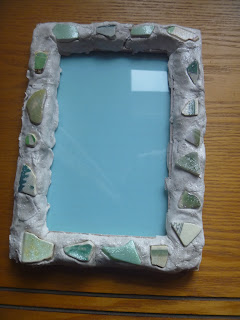 Once the clay dried I painted the whole thing with glitter nail varnish (which Crafty Green Boyfriend's mother had bought from a jumble sale for me to use in craft projects).

Not bad for a first attempt! I think though that it would be better with slightly less clay and perhaps more pieces of sea pottery. I also know that the clay may not be strong enough to hold the pottery in place long term so I'll need to look into that. The frame would look better if I painted the clay, but that would make it difficult - the clay would need to dry before I paint it, which would mean I then wouldn't be able to put the sea pottery in very easily, and if I painted the frame after putting the sea pottery into it, then I'd end up painting over the pottery shards!

A word about the glitter too. Regular glitter has recently been identified as an environmental problem as it is made from plastics and can end up in watercourses where it is eaten by fish and other water creatures. (Read for example this article). However the glitter is unlikely to wash off (or even flake off) the frame and I reckoned better to use it up than to throw it away. It's often difficult to know what to do in that kind of situation.....

I hope to be able to make a few more of these!
Crafted by Crafty Green Poet at 12:14 pm

Good for you for trying this, I do like the sea pottery.

__ I've seen something similar to this, but with marbles; ugly. Yours, however, is far more attractive, and yes, a more stone-wall-ish facade would fully amplify its attractiveness. Nifty. _m

Maybe the picture to put in the frame will have some influence on the size of sea-glass pieces and also how much clay vs. glass. On to something though!

That's a very good point Rabbits Guy -but tricky if I were making a frame for someone else as I wouldn't know the picture they'd choose....