I went to a jewellery making workshop last night. It was rubbish, literally! Held in the downstairs workshop space at the SHRUB Swap and Reuse Co-op and run by Changeworks, the workshop showed us how to make jewellery from inner tubes, which are apparently very difficult to recycle and often end up in landfill sites.

We were shown how to cut the inner tubes (they cut beautifully, specially if you use scissors, slightly more tricky if you use a crafting knife) and were then shown some designs for inspiration. Then we were invited to make our own items!

It was a very sociable event and it was great to have two hours to just play around with ideas and make things. I tried to make two pairs of earrings. The first pair, which you can see in the photo, worked (though they're far from perfect) 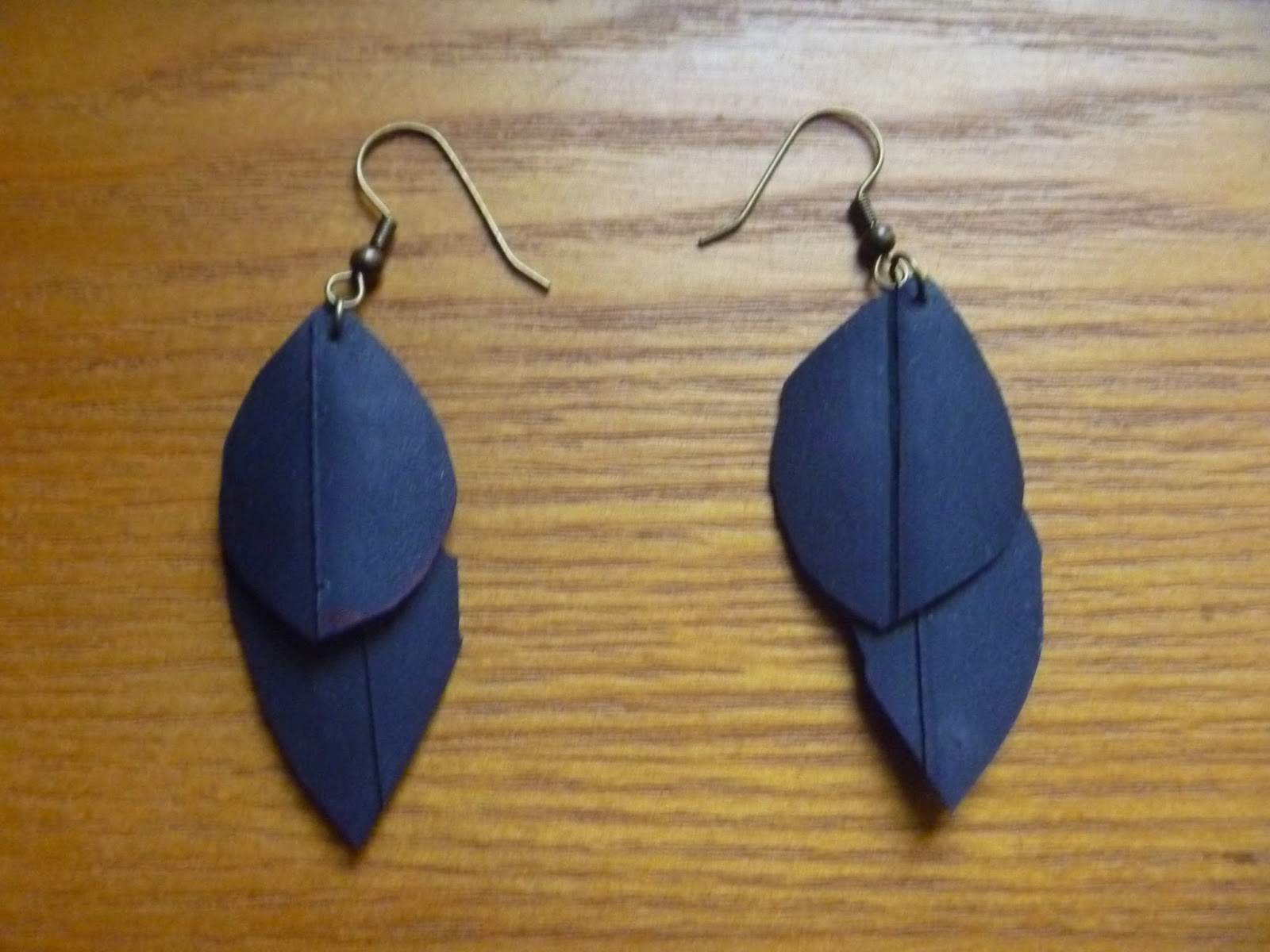 and the second pair were a total failure!

It was very nice to work with a new material that I've never used before. Specially finding that it's such a lovely material to work with. However I can't ride a bike (shameful admission for an environmentalist I know!) so I won't have a supply of inner tubes of my own.

If you're in (or close to) Edinburgh and want to try making things from inner tubes, Changeworks have a supply, and if you ask nicely they will probably give you some!

You can read about the previous jewellery making workshop I attended here.

Crafted by Crafty Green Poet at 9:14 am

How neat you can use recycled materials.. The earrings are pretty.. Have a happy weekend!

How creative! For a moment, when I read the preview, I thought you were saying the workshop was bad!!! sigh.

Beautiful blue leaves -at least that's the color they are on my monitor. In case they are black: beautiful black eaves!
Have you never learned to ride a bike or do you have balance issues?
:) m & jb (who can't ride a bike, either)

Hi Maureen, they're actually black, but even on my monitor they look a bit blue! I can actually ride a bike, but only a bike low enough for me to sit on it with my feet on the ground at both sides (so that I can feel safe when i stop) and only on straight, flat roads. So it's pretty usefuless in any real life situation, specially in a busy, hilly city like Edinburgh!

That's so neat! I have been to jewelry making workshops before, and it was a disaster each time, haha! I am, uhh, NOT good at making jewelry, to put it lightly, haha... - www.domesticgeekgirl.com

They are a pair of earrings, a brilliant creative work, CGP you are superb.

Um, I guess I should have asked. Are we talking about a bicycle or a motorcycle here? LOL!

How about one of the recumbent bikes? Or one of those tricked out 3-wheelers!

Rabbits Guy - funnily eough I was just thinking about a three wheeler, it would be quite fun, but there would still be the issue of the busy Edinburgh traffic