I'm studying a larch for Tree Following this year. This photo shows the larch within the context of its surroundings. 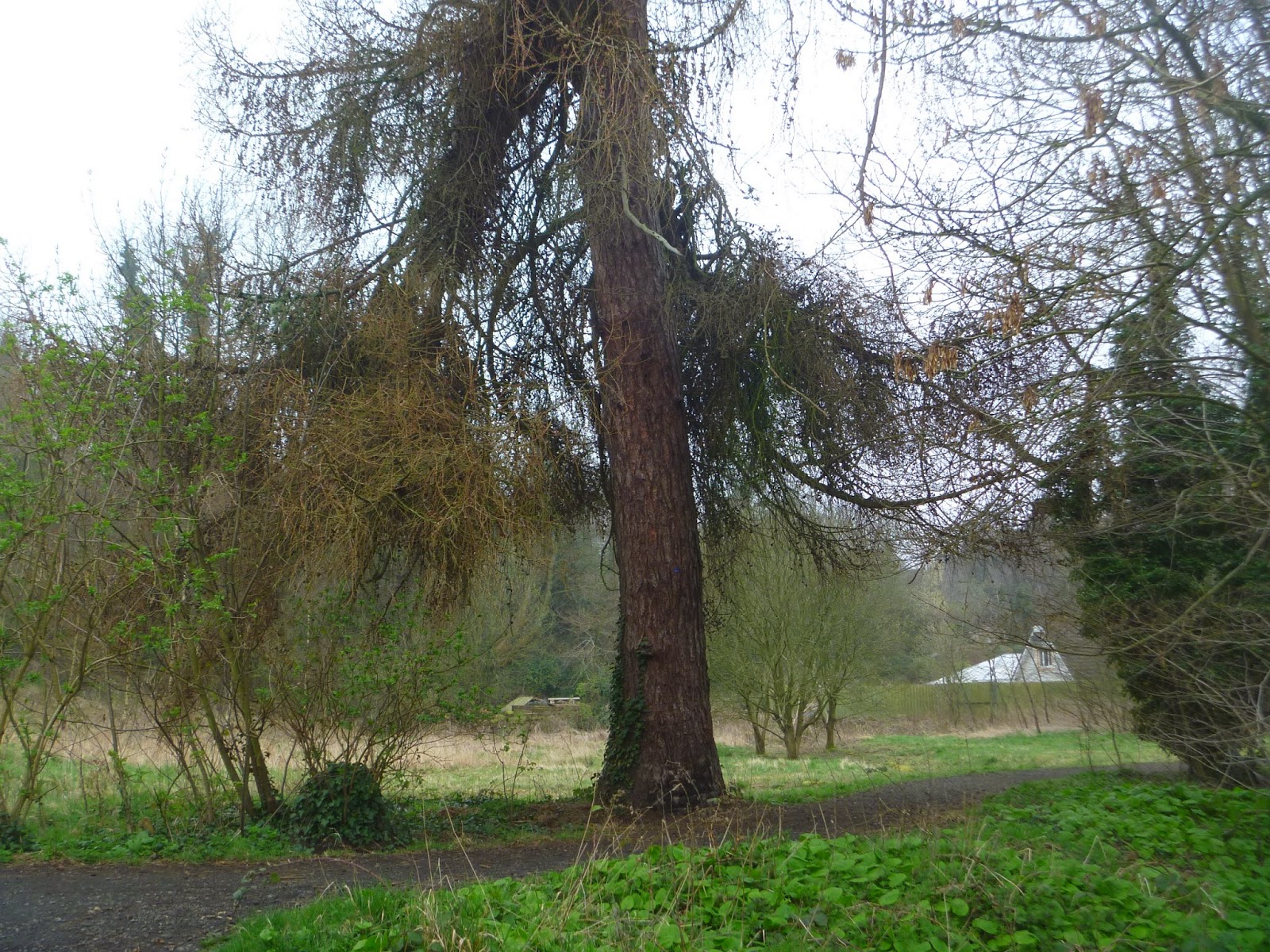 The larch stands by the side of the footpath that runs though Colinton Dell by the Water of Leith. This is now one of Edinburgh's most beautiful green spaces, but once was crowded with industry, there were numerous mills along the river. You can see a building in the background of this photo, this is a modern house built on the site of the old Bog's Mill House. The green field behind the larch is where the mill itself used to stand and is currently being turned into a wildflower meadow by the Water of Leith Conservation Trust. 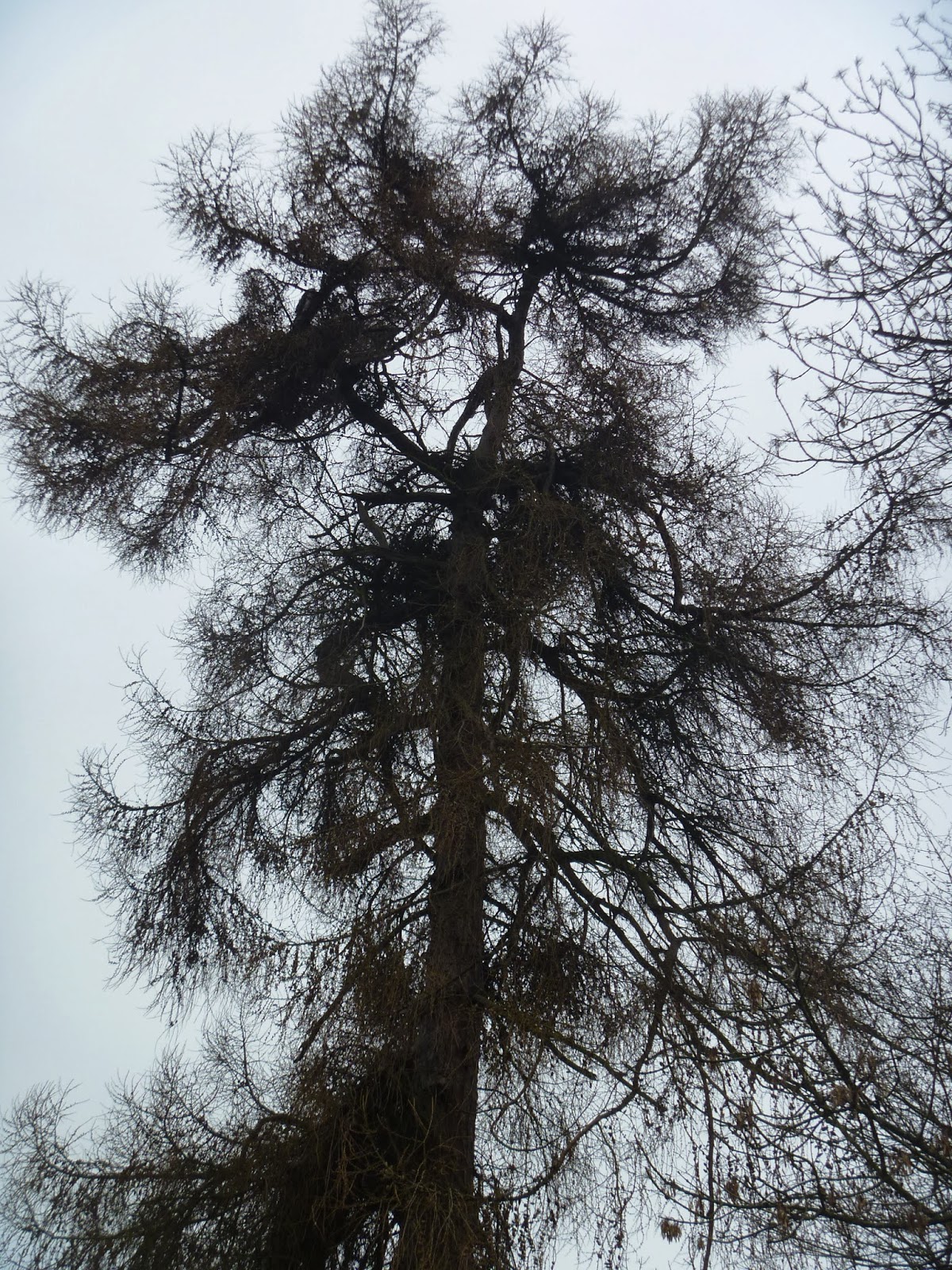 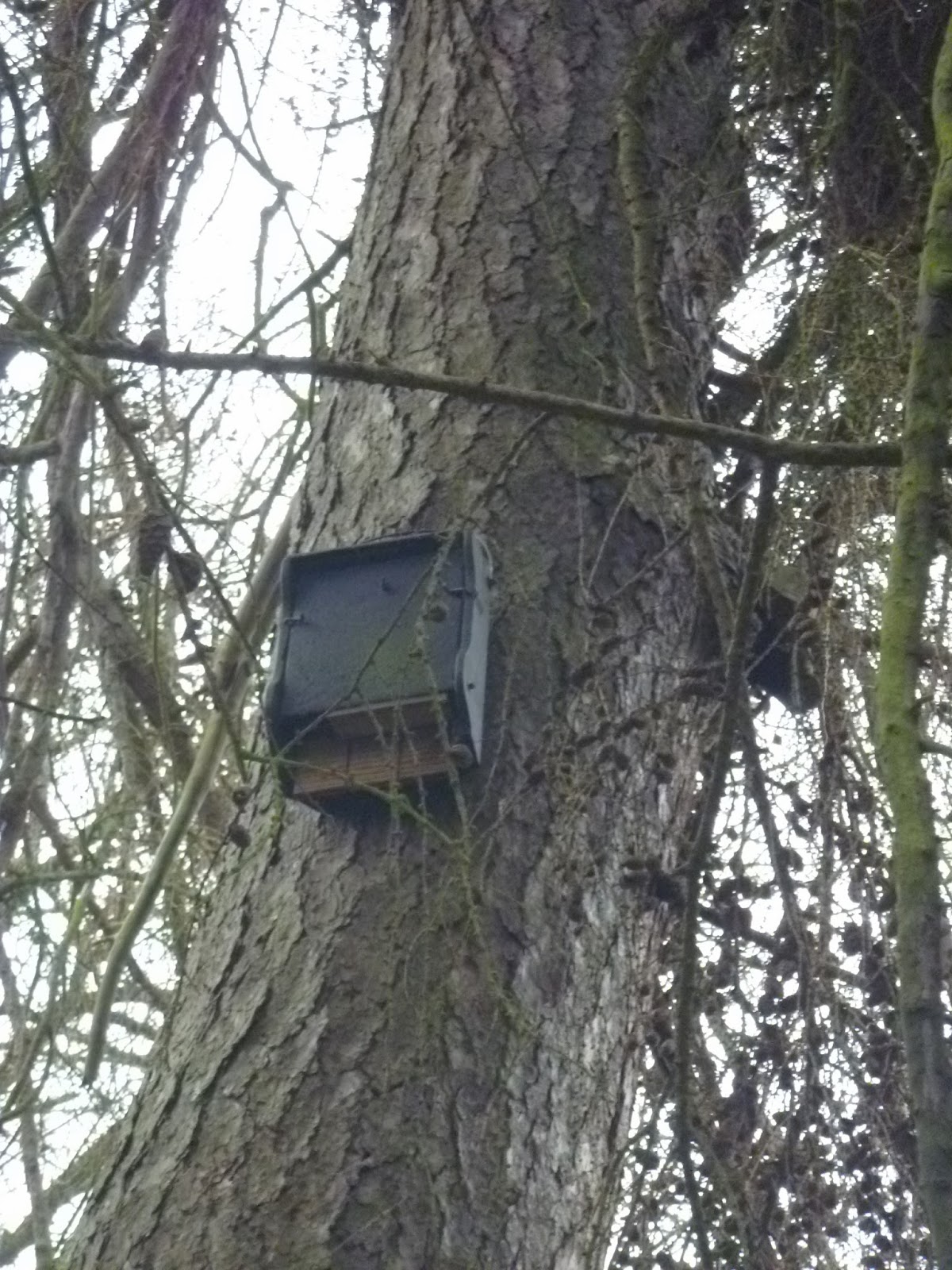 The larch isn't just home to the long tailed tits, who I've watched building their nest in recent weeks (though I didn't see them today), it also has a bat box on its trunk. There are lots of bats in the area, mostly pipistrelles. Both Water of Leith Conservation Trust and the Edinburgh Countryside Rangers lead bat walks in the summer.

The female flowers of the larch are still in bloom and today I managed to get both flower and cone in the same photo. 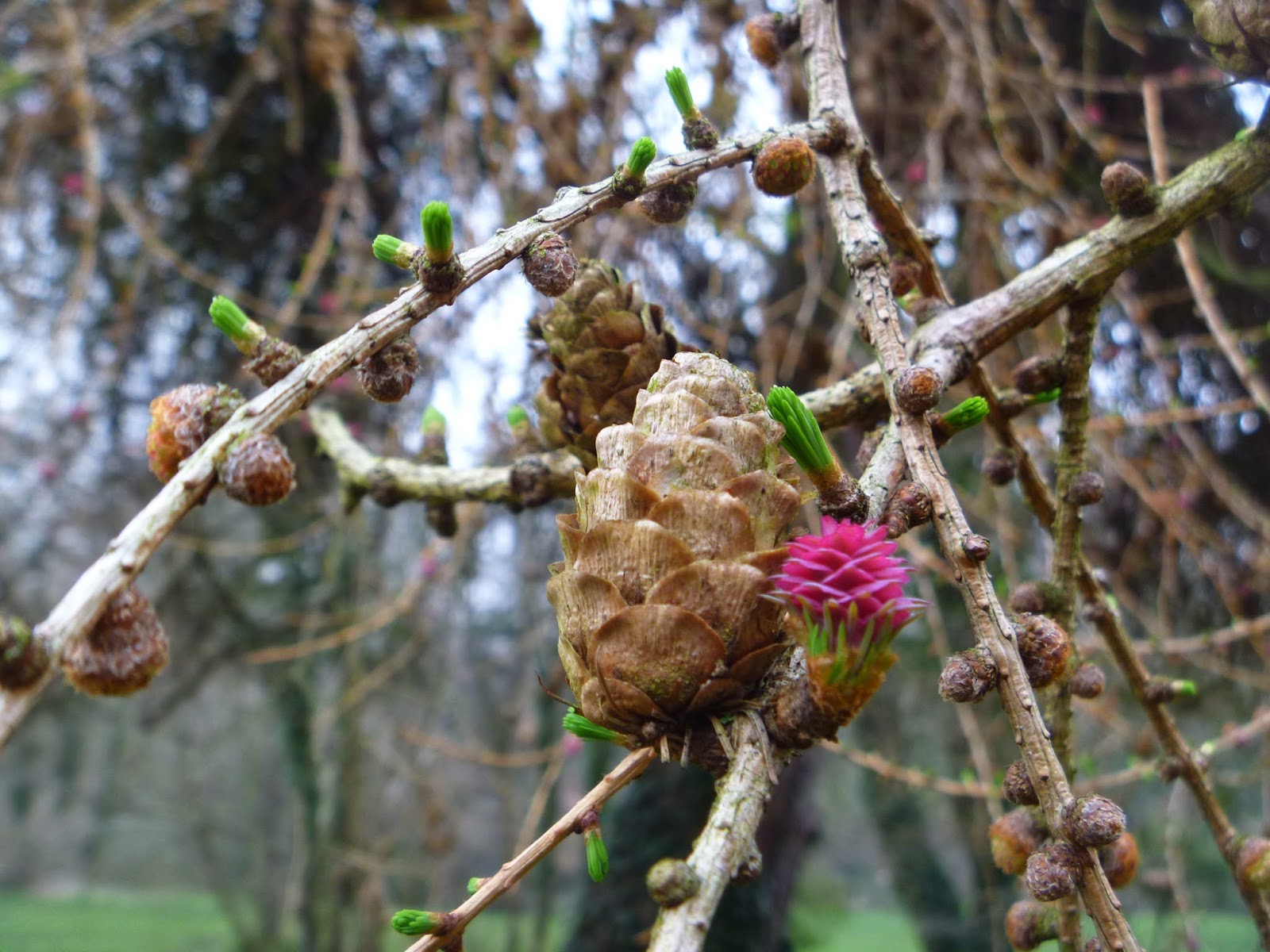 The wild garlic is luxuriant throughout large parts of the Dells at the moment. 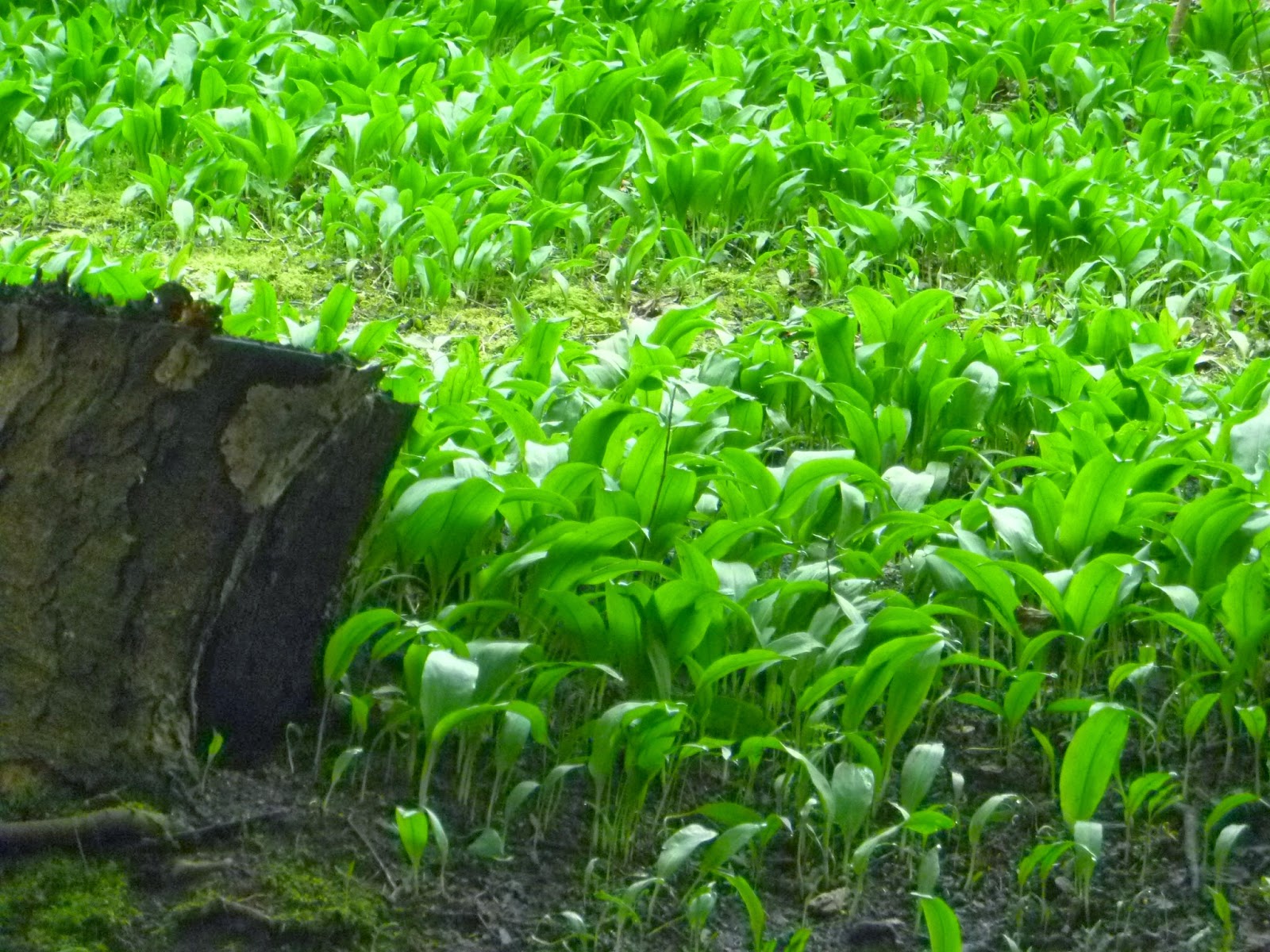 The birds are singing loudly. I watched a grey wagtail, running up and down along the riverbank, collecting insects for its chicks.
Crafted by Crafty Green Poet at 12:56 pm

Email ThisBlogThis!Share to TwitterShare to FacebookShare to Pinterest
Thinking about: In and around Edinburgh, nature diary, photos, Spring, treefollowing, Water of Leith

what a great tree for your tree following project. such beautiful flowering you captured. your organic rocket seeds have taken off quite well. i planted a sweet potato plant back in October and am happy to report is still thriving. i hope it will last a few more weeks and then i'll try to plant it outside. your grey heron was a bit hungry wasn't it? hope all is well. have a great day~

'Tis true then, with some assistance, we can aid nature as it overcomes any harm we may have caused... as explained by the sub-words of your photos... .

A wildflower meadow. Lovely.
I do enjoy the bats around here. Their numbers fell off sharply for several years due to white nose syndrome, I guess. Saw more last summer which is encouraging.

P.S. Josephina was thrilled with your visit today ;)

Is the Larch what we call Tamarack? Gets very yellow in the fall and loses the needles?

Magyar, indeed, one of the things I love about Colinton Dell is how much it shows that nature can recover...

Maureen - it is lovely in spring and summr, though it's not uet finished and will be even lovelier in years to come. Hope you get more bats this year.

Rabbits Guy - there are several species of larch round the world, your Tamarack sounds like one of them!

The Larch is a beautiful tree! It is wonderful to hear there is a meadow on the old mill grounds. The bats are having trouble here, hopefully their numbers pick up. Have a happy day!