The Value of Woodlands

I made my usual walk through Colinton and Craiglockart Dells by the Water of Leith today. It's a wonderful area of ancient woodland (well the area has been wooded for centuries, although it isn't undisturbed and some of the species aren't native).


The hornbeam (a non-native species, first planted centuries ago as its wood was nice and hard and useful for building parts for the mills that used to line the banks of the river) is just starting to show its female catkins. 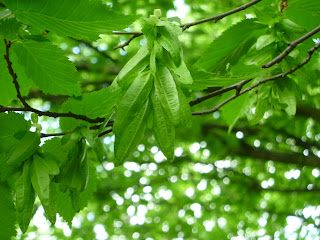 Some parts of the Water of Leith (though not the Dells) are undergoing building works at the moment for the new Flood Prevention Defences. Trees have been cut down in places to allow this work to go ahead. The council and the building contractors have promised that the banks will be regenerated after the work, but this will mean that the flood prevention barriers will be seeded with wildflowers, which is fine but the trees are very unlikely to come back. The Flood Defence work is seen as necessary to protect the housing along the banks of the river, but if planners had refused permission for housing to be built so close to the river then it wouldn't be necessary to damage the ecology of the riverbanks in this way.

Meanwhile down in England, though the Government seems for now to have abandoned its plans of selling the forests, several areas of ancient woodland are threatened by development:

The planned High Speed rail link between London and Birmingham would damage or destroy a number of areas of ancient woodland. High speed rail is seen as environmentally friendly because at least theoretically it diverts people away from flying, though personally I thought the normal speed rail link between London and Birmingham was already quick enough - why is society so obsessed with speed? Is it appropriate or necessary to destroy the environment to reduce travel times? You can read more about the proposed High Speed Rail Link and the damage it would do here. The page also includes a list of ways in which you can help campaign against this development.

It seems that a recommendation has been made to expand a quarry (despite independent research showing that existing quarries can supply enough stone) that threatens Oaken Wood, an ancient woodland in Kent. You can find out more about that here. STOP PRESS (10 May) this quarry has been given the go ahead so that is another piece of ancient woodland that will be seriously compromised.

You can find out more about these and other woods under threat in the UK and the valuable work the Woodland Trust does to try to save these areas on the trust's website here.

sigh..it makes me sad to think of ancient woods being threatened.

Would love to see the woods saved & protected!

The photo of the hornbeam is heavenly.

Hi Juliet. Thanks for highlighting the damage that is HS2. We are slap bang in the middle of it here in the Chilterns and I shudder to think of the damage to this beautiful county. All in the name of so called progress. I hope it is one of those things which eventually falls by the way side. We have less woodland in this country than almost anywhere else in Europe and I think we should campaign to keep what we have got intact.

It's sad to hear this news. We live in Florida part of the year now and the news here is sad -- the environment is being threatened in so many ways by unenlightened legislation. I would have thought and hoped that England and Scotland would be more advanced! But human nature -- the need to expand, speed up as you say -- is the same sadly everywhere I guess.

I do feel that the High Speed Railway is uneccessary and a waste of money as well as a threat to woodlands and countryside. As you say, the trains are fast already.

Listen folks. Write a letter. Visit your elected representative. Make your voice heard. Join a group. Get the word out. Become well informed.

There are many ways to help - don't just think about it or fret - take SOME action!

CGP is your inspiration!!!!