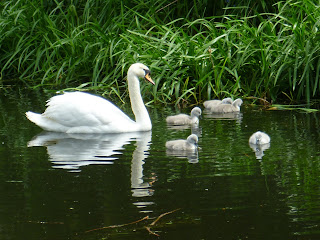 How can anyone call them ugly! We saw this swan family on the Union Canal today. The cygnets were very curious and came right up to us.

We also saw a female mallard with eight ducklings that looked as though they had just hatched, they were full of curiousity about the world around them and were zipping around at top speed, too speedy to photograph, but oh they were fun to watch!

We saw lots of swallows too, flying around low over the water, chasing insects. They seem to be nesting in the new flats near the canal. Last time we were there we saw house martins, but they didn't seem to be around today. There were also huge numbers of house sparrows, making loads of noise in the hedges, they seemed to have plenty of young. This is great news as in the UK, the house sparrow is declining rapidly in number!

as ever text in red contains hyperlinks which take you to other webpages where you can find out more!
Crafted by Crafty Green Poet at 2:48 pm

They are adorable! what fun for you to watch them grow up.

They are even more beautiful than ducklings in my opinion.

Weaver - yes at that age i agree, even cuter than ducklings!

I am jealous..love the cygnets!

I love watching ducks and swans. The babies make such cute sounds, too!

Ugly?!! No! so cute and lovely! I would have liked to be there with you to obsreve them!

What a delightful spring photo of the swans and cygnets ~ sounds like a wonderful time you had in a lovely area.

I think they are the most graceful bird in the water.

Oh, I love swans and love to see the families of them at some of our parks here! Your capture for the day is gorgeous! I love it! Wonderful! Hope you have a great weekend, Juliet!

They are so cute and fuzzy!

There are goslings and ducklings out on my running route now. I love to see what they are up to!

You're so right, Juliet, they're not ugly, they're adorable.
— K

Ugly they are not. I think the fuzzy little ones are precious. Your image captures the spirit of the family. Wish we had swans around here. sigh!

Somebody did start calling it ugly duckling but aren't ugly at all ^_^ Thanks for the visit!

they are so cute ! I don't understand either why they say "ugly"

Do you know the ballad "Two Island Swans -One Last Cold Kiss"? It is a brillaint song and has become an anti-hunting anthem. Here is the youtube link to Irish singer Christy Moore's classic version: http://www.youtube.com/watch?v=NNVuBnB086Q

Really great blog. My friends referred me your site. Looks like everyone knows about it. I'm going to read your other posts. Take care. Keep sharing.

A lovely photo Juliet and no, definitely not ugly!

Sadly, I have noticed a definite decline in House Sparrows here, they used to be the most common visitor to my garden, now they are a rare treat.

What a delightful walk. Around here we're seeing lots of baby ducks and geese, but no cygnets. I love the baby swans and was hoping the pair I've seen now and then on the lake at the university would stay and raise a a family.

I'm hoping all goes well with the canal development. It can be a tricky thing to make sure the environment doesn't get jeopardized.

The cygnets are beautiful - we saw 4 swans on the stream close to us today. They usually stay right out on the marsh and we have never seen 4 come so close.

I love the way ducklings look with their soft downy feathers.

Ugly? Heck no! I love all baby birds, all of them.