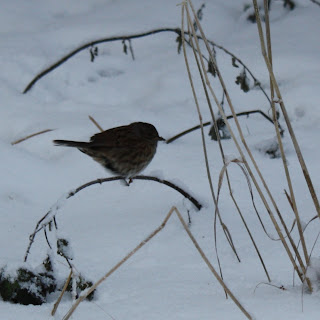 We have an extra Bank Holiday for New Year in Scotland so Crafty Green Boyfriend and I went off along the Water of Leith again. Ankle deep snow as it was two weeks ago and only patches of ice, which made for mostly comfortable walking. There weren't as many birds around as last week, but we enjoyed watching this dunnock (above) feeding on the seedheads of nettle.
There were some magnificent icicles by the weir at Colinton. 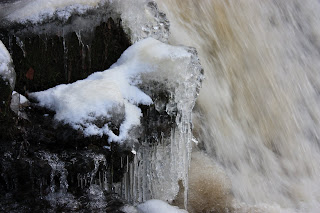 Above the weir there were three goosanders, two males one of which seemed to be trying his best to impress the one female. A dipper and a mallard swam around close by, unimpressed by the displays. The photo just shows the two male goosanders. 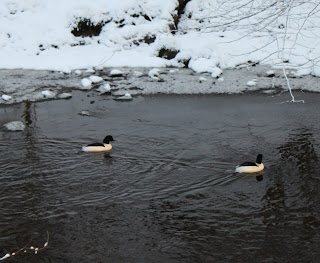 Email ThisBlogThis!Share to TwitterShare to FacebookShare to Pinterest
Thinking about: birds, In and around Edinburgh, Water of Leith

Very interested to read of the bird life in your locale Juliet. Snow certainly seems to bring birds to our bird tables that we don't normally see such as redpolls, wagtails and the odd green woodpecker. I have been putting out lots of fat products too to keep them going. Our temps have really dropped (for the south-east) to -4 degrees. Last year we had flocks of waxwings in the local rowan trees and they demolished the fruit in no time at all.

I've always been rather jealous of that extra bank holiday you get!

Oh that tiny little bird in the snow... A very moving post.

The dunnock is one of my favourite birds, Juliet - so quiet and unobtrustive - yet on the odd occasion when I have been near enough to get a close look, they really are such very pretty birds.
We have a pair who nest here each year and bring their babies to the bird feeder.
I love your snowy header. We have a lot of snow too - it is beautiful in the sunlight but pretty hard going to walk through.

Such beautiful pictures! Adverse weather has its bonuses :)

Nice photos. Is a dunnock some kind of finch? I love that shape.

hey crafty green, it's neat to see running water and birds. we have wintering canada geese and on the weekend i saw a male cardinal - bright red! have a lovely evening. steven

Kia ora from New Zealand. Thanks for stopping on by and tipping me off on the "cup" and "cloth", lol! Both will most certainly be considered! I just need to find some place in NZ that sells such handy items.

And oh wow! Look at this blog of yours! We have a lot in common!! I am married to a Scot (from Aberdeen)and I write poetry! Here's a poem from me to you - it's based on a dream I had, but for some reason (I may be wrong) I thought you might like it:

No sound
so brave
than a thousand coloured beads
moving on a rattle....
Multifarious colours
moving to the flick
of a moonfish
tail.

It's really nice to meet you and I'm listing your blog in my favourites panel (called "Blogs I Love").

Beautiful views but way too cold for me ... seriously ;-)
Hugs and blessings,

Lovely walk. I love birding in the cold month. Nice photos, too.

Is this typical weather for Scotland?

Christina - no its not normal, at least not for these days, it was probably normal 20 years ago, when my partner was growing up here.

All winter I put out food for the little one's. And when it is as cold as it is for the moment (-20 C yesterday) I try to give them some water too. We should all help the bird, if we can, so that we can listen to them in the springtime.
Like you icy photos, real cold feeling.