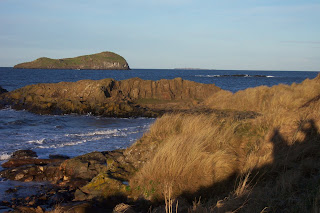 We had a wonderful day at North Berwick today, a small seaside town just a short (though slow!) train ride out of Edinburgh. The tide was very high and quite dramatic when we arrived, looking quite spectacular in the winter sunlight. Out at sea there were rafts of eider ducks that appeared and disappeared with the swell of the sea. As the tide went out a bit, wading birds gathered on the small bit of beach - redshanks, oystercatchers, turnstones, sanderlings and dunlin (I have to admit here that my wader id skills aren't perfect so I may be wrong about the dunlin!). Also two male goldeneye ducks were riding the waves like surfers. North Berwick is most famous for its gannets, but they're not around at this time of year, we'll need to wait for summer to see them, when the famous Bass Rock will become white from the sheer number of birds. 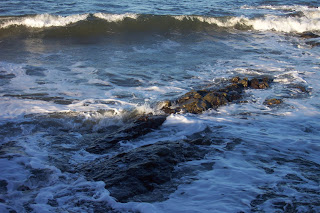 Sounds like you had a great birding outing. Loved the photos.

I love these photos, especially the top one, which reminds me a little of Maine.

Wonderful photos! We loved that area when we explored it last year (when all the ladybirds were everywhere). Bass Rock from Tantallon castle is an amazing sight.

We have been stuck inside by the snow today...

It's nice when the clouds go somewhere else. Sounds like you had plenty to see.

Wow. What a blue sky.

You have a lot more birds in the sea water and on the sand, all at the same time, than we do. Must have been a great sight to see. Lovely.

Sounds like a fabulous day, and looking at those photos it's hard to imagine that just a few weeks ago there will have been snow everywhere! lovely!

Dunlin, that's what I confuse with knots, not dotterels... my wader skills let me down too, I think it's easier to get to know their movements and habits and habitats than to try to recgnise them by plumage. Turnstones are quite distinctive, as are oystercatchersand often come in quite close.

Beautiful photos. I could just hear the sound of the waves splashing!

What a beautiful day that must have been!

I can see that you would have a good day there, it is lovely. Love that blue water.

Your photos are beautiful. It must have been a great day wandering around. Thanks for a nice read and journey.

Sounds like a great day out. Dunlin - yea not the easiest to ID in winter - much easier in summer.

What a beautiful landscape ! I have never been up to Scotland yet.

Thank you for sharing the water and bird-watching trip. I can never decide if I love "our" ocean more at high tide or low.

We have dunlins here at our "no-lake" -- they are just about identical (to my amateur eye) as a sandpiper up close, but they fly in tight formations of hundreds and they swoop, it's a surreal effect when the sun catches them.

I loved your post. I showed it to my friend, who's sitting here with me right now, and we were discussing how our ocean looks like ours!! Just beautiful. ~ks

I loved your post. I showed it to my friend, who's sitting here with me right now, and we were discussing how our ocean looks like ours!! Just beautiful. ~ks

What a beautiful place and marvelous photographs!
Hugs and blessings,

Great photos. Looks like you have a great time

What a beautiful coastline - it looks unchanged for centuries.

what a pretty spot, love the photos. Sounds like you saw some good birds!

What a beautiful place. I could get lost in the colors, listening to the wind and the water. Truly lovely.

文章 said...
This comment has been removed by a blog administrator.
7:53 am