A Close Look at Nettles for 30 Days Wild

It's very easy to take nettles for granted, they grow profusely in areas we often refer to as waste ground, they sting and they don't have pretty flowers. But they are really useful for wildlife, many butterflies lay their eggs on nettles for example. Also nettles have culinary and medicinal uses, you can make tea from the leaves and deliberately stinging yourself with nettles can apparently ease arthritis (though I've never met anyone who has been brave enough to try this cure!).

So I was looking closely at some nettles today!

Several nettle tag moths were flying around, this small moth is usually to be seen on nettles. 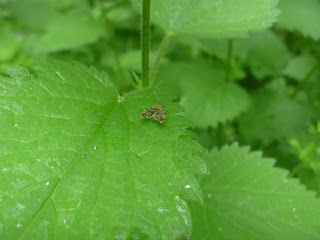 Some of the nettles i was looking at had patches of nettle rust fungus. Almost every species of plant has its own species of rust fungus, though all these fungi look very similar to our eyes. 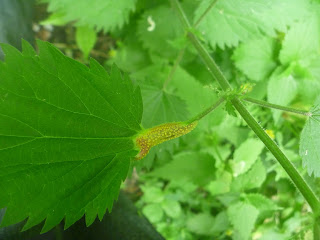 What have you been looking closely at in nature?

That’s really interesting about nettle stings relieving arthritis. Bee and wasp stings do the same—at least in the US, until about 60 years ago, hospital pharmacies would stock bee venom for people suffering from arthritis. I remember a few years ago, picking blackberries in the woods (they’ll be ripe here in 2 or 3 weeks), I grabbed a tree branch to steady myself because my knee was hurting. I felt a poke, saw a honeybee falling down, and my knee stopped hurting almost instantly.

Now, do thistles have any similar advantages? There are places in the pasture that are nearly overrun with them. Some are nearly as tall as me.

Hi Larry, that's interesting about bee stings! I don't think thistles have that type of advantage

I have seen people rub young nettles on them to keep mosquitos away! And have heard that young nettle soup is good in the spring.

Great info and photos. The plants are very useful for the wildlife.
Have a happy day and great weekend!

Hi RG - yes nettle soup is nice, you can make a kind of pesto with nettle leaves too which is quite tasty