In 1819, engineer, Thomas Telford and Poet Laureate, Robert Southey went on a six-week tour of the Scottish Highlands to inspect the region’s newly built roads, bridges and canals. This became known as one of the greatest road trips of the era and was chronicled in Southey's meticulous journals which were finally published in the 1920s.

At the National Library of Scotland today, landscape architect and historian Paul Daniel Marriott, who's visiting from the US, gave an illustrated talk (Little Threads of Civilisation) about this extraordinary scenic journey.

The talk started with a photo of the beautiful Dean Bridge, designed by Telford, which spans the Water of Leith and followed the travellers up into the Highlands, including the Parallel Roads at Glen Roy (actually not roads at all, but the marks left by an ice age lake as the water level retreated) which Crafty Green Boyfriend and I had visited during our recent holiday.

Along the way, Marriot spoke about the picturesque school of landscape appreciation (which coincidentally I had just been reading about in Penelope Lively's book Life in the Garden (which I will eventually review on this blog).)

The main purpose of Telford and Southey's trip was to inspect Telford's engineering works in the Highlands, particularly his bridges, his canal locks and his roads. (He seems to have been a particularly prolific engineer). So Marriot talked a lot about roads, which back in 1819 were of course a new technology, enabling people to get around much quicker than they had formerly done and allowing for mail to be delivered speedily. As the traffic was made up of horses and carriages, roads weren't then the polluting problems that so many roads are today (though they had their own problems, not least highway robbers).

It was a fascinating and entertaining talk, as are so many of the talks presented (for free) at the National Library.

After the talk, I walked through the Meadows where I met this grey squirrel 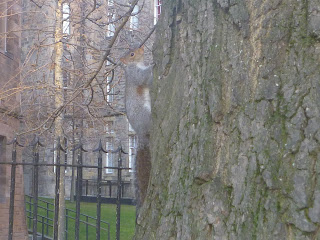 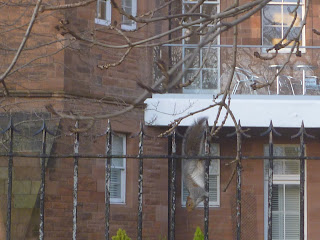 Email ThisBlogThis!Share to TwitterShare to FacebookShare to Pinterest
Thinking about: In and around Edinburgh, nature diary, photo, review

Squirrel time! Me, I've never driven anywhere and don't miss it, walking a very long way I want to do.

Hi Simon, I've never driven either. We always use public transport or walk, though we do hire a car when on holiday in remote places (and Crafty green Boyfriend drives)

Beautiful Squirrel climbing a tree, and the info.

Hello,
I do enjoy a road trip. This talk by Marriot sounds interesting. The roads should have been updated to handle the traffic in this day and age. Cute squirrel. Enjoy your day, wishing you a happy weekend!

It sounds like a fun trip to recreate (if I had six weeks to walk)! Compared to the US, the UK has a great passenger rail system and I enjoyed taking the train through the Highlands.