Blackford Pond to Hermitage of Braid on a Cold Frosty Day

After hearing about the teal I had seen on Blackford Pond I had seen last Wednesday (see this post) Crafty Green Boyfriend was keen to go along today to see if it was still there.

It was a very cold morning, but we were lucky enough to get some very good views of the teal and Crafty Green Boyfriend took these photos - much better than the ones I took last Wednesday! 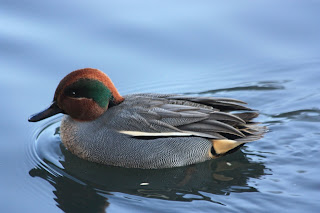 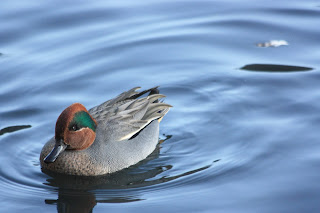 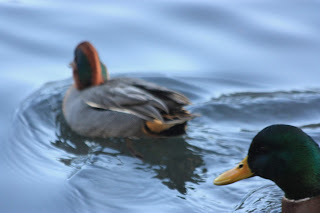 We were also interested to see at least 5 rats alongside the pond (just next to a sign asking people not to feed the rats). Here are two of them. 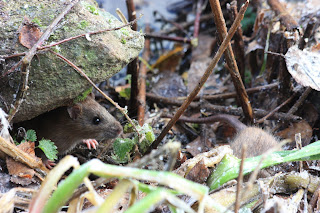 The pond is largely frozen at the minute, which seems to confuse some of the birds, like this moorhen 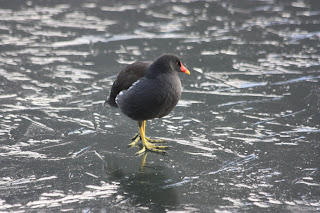 After walking round the pond, we continued past Midmar Paddock (still threatened with potential housing development as far as we know) 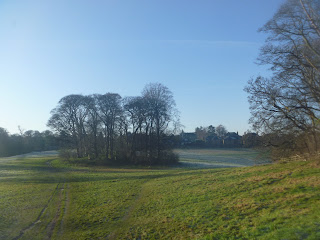 from there we walked into the Hermitage of Braid, which was freezing cold, as it is out of the sun, but always beautiful, being a lovely stream running through a wooded valley.

Email ThisBlogThis!Share to TwitterShare to FacebookShare to Pinterest
Thinking about: autumn, In and around Edinburgh, nature diary, photos, winter

I love being out and about on cold frosty days …
A lovely collection of photographs here, I enjoyed them :)

Beautiful teal...so funny the mallard photobombed ! (They are rather aggressive ducks I’ve noticed before, so probably shouldn’t be surprised). The pond area looks pretty. If it is frozen won’t the moorhens and other birds go elsewhere?... and ugh rats...who would feed them on purpose?

Look to be a delightful place for a chilly walk.

Sallie - I've never seen the pond entirely frozen over and I guess that the park rangers would see that there is some water always kept free but yes if it does entirely freeze, the birds might need to go somewhere else. I don't think people feed the rats on purpose, it's just that many people put down too much food for the birds and its the rats that end up eating it.

Thanks Magyar, a lovely wee poem