Dodo - the Bird behind the Legend by Alan Grihault 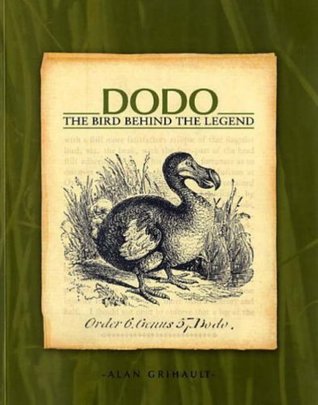 This is a beautifully produced, lavishly illustrated book about the dodo. It examines the history of the human relationship with the bird and how we drove it to extinction, the details of its biology and its role as a cultural icon. It also looks at closely related species found on other islands near Mauritius.

It's interesting to see the myths that have circulated about the dodo and this book does its best to clear those up and to reveal the truth about questions such as : how exactly did humans drive the dodo to extinction? and What did the dodo really look like?

It's a totally fascinating book and an important one to read in these times when it is becoming clearer all the time that we are entering a Sixth Great Exctinction.

Dodo: The Bird Behind the Legend by Alan Grihault published (2005) by IPC Ltd (Mauritius)
Crafted by Crafty Green Poet at 3:38 pm

Thank you, Juliet, for this tip-off: it sounds a worthwhile and interesting (if sad) book.

Thanks for highlighting this excellent book.

This sounds like a book that I absolutely have to have. I will immediately start to search for it. It is probably out of print, but I will check second hand book stores, thrift shops etc. Thanks for featuring it on your blog.

What an interesting find!