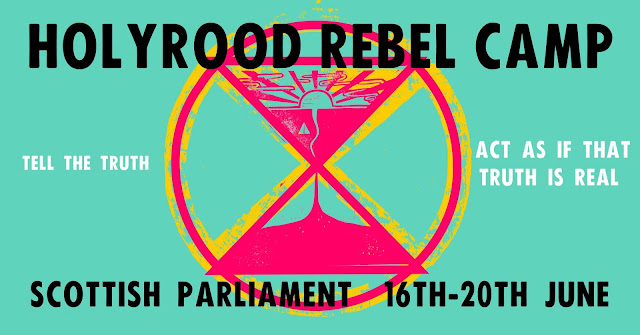 The camp will offer a range of activities including creative events, bike rides, discussions and
non-violent civil disobedience. You have such a range of options that you don't need to feel that you need
to risk arrest or do nothing. The idea is to have fun while alerting politicians and others to the urgency
of the climate emergency that we face.

More information from Extinction Rebellion below:

Holyrood Rebel Camp
Climate emergency has been declared by our politicians: they have told the truth. Now they need to act
as if that truth is real, with legally binding policy measures. The Scottish Climate Change Bill sets a
2045 net zero carbon emissions. At the same time, the Scottish Government supports maximum North
Sea oil extraction. On June 18th and 25th, amendments will be discussed  in the Scottish Parliament.
We demand MSPs change the Bill’s target for net zero carbon emissions to 2025, and create a
Climate Citizens’ Assembly to oversee the changes. We will set up a Holyrood Rebel Camp to
pressure our politicians to pass these amendments.

This will be a fun and peaceful gathering. There will be outreach, performances, protests, workshops,
talks, people’s assemblies, but also non-violent direct action (NVDA).

We are taking action in Scotland because of our reputation as world-leading on climate. Whatever Bill
passed will likely be among the least inadequate legislation in the world. An effective Climate Bill
would pressure other governments to follow. Scotland can be a world leader on climate and ecological
emergency. But we’re almost out of time, and we need to get the message heard loud and clear,
before it’s too late.

The time to take action is now. Join us!


Monday 17th June: Big Launch - Parade of Life starting from St Giles Cathedral at 10am, down the
Royal Mile to arrive at Parliament around 11am


Wednesday 19th June: Regenerative day - family-friendly activities at the Camp and in Holyrood Park
and environs

Email ThisBlogThis!Share to TwitterShare to FacebookShare to Pinterest
Thinking about: campaigning, extinctions, In and around Edinburgh