Yesterday I attended the launch of the Edinburgh International Science Festival. You can read more about the programme for this year's festival in yesterday's post.

At the event, I caught up with two scientific demonstrations. The first one involved first producing carbon dioxide by pouring boiling water onto dry ice (carbon dioxide in solid form, called dry ice because it doesn't have a liquid phase but turns straight from gas to solid when frozen to very low temperatures). The dry ice then sublimated to produce gaseous carbon dioxide. 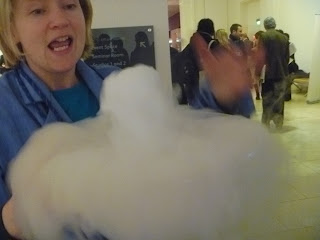 then washing up liquid was poured into the tube and captured the carbon dioxide in bubbles, preventing it escaping further into the atmosphere. 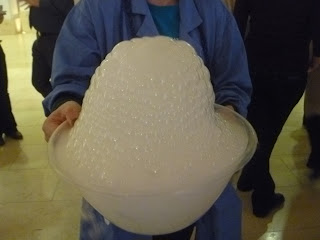 This is similar, at least in theory to the methods used to capture the carbon dioxide produced by power plants to prevent the gas adding to global warming. You can read more about carbon capture and storage here. You can read about the drawbacks of the process (not least the fact that it isn't yet commercially viable) here.

The second demonstration involved optical illusions and a plastic model of a rabbit that magically changed shape, but, as they say, you had to be there. It was, sadly for all the bunny fans who read this blog, a demonstration that couldn't be captured on film.

Edinburgh International Science Festival will take place at venues across the city from 23 March - 7 April.

Email ThisBlogThis!Share to TwitterShare to FacebookShare to Pinterest
Thinking about: Edinburgh International Science Festival, In and around Edinburgh

This reminds me of the science festival I was a part of when I was a little boy :)

For the bunny in particular I really would have liked to be there..oh, by the way since after I wrote a poem in a post about their little bones and you made an observation about eating them I haven't eaten a rabbit any more!

You DO lead an interesting life!

I guess just about everything living captures carbon dioxide and makes carbon out of it. We need lots more plants and trees.

I think it is wonderful for the children to be involved with these experiments. One can learn so much. Have a happy weekend!

Great visit photos. My kids tech me about science all the time!