Up the River Tay 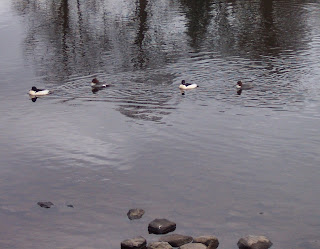 On Saturday afternoon we went further up the river Tay than we've ever been before and we rewarded with lots of birds. The handsome creatures in the photo above are goosanders, the males are the whiter ones. Click on the photo for a closer view of the birds and their reflections.

We also saw over 30 wigeons, which are very pretty ducks. There were also over 40 oystercatchers, making a lot of noise and flying around a lot with four or five curlew quietly hiding in their midst. A group of cormorants squatting on a rocky island, several of them adolescents which look confusingly unlike their parents. Also confusing were the three winter plumaged little grebes. We also saw three herons quietly standing in the water nearby and three deer on the riverbank. So it was a very wildlife rich walk....

I don't quite know what it is about a moving body of fresh water, but I always felt a certain serenity when on a lake or river. I'm less of a fan of the ocean, and ponds are mostly productive of bugs.

I suppose it's the conduciveness fresh, running water has for life that makes me gravitate toward it?

Whatever it is, I love it, and it's portrayed well in your pictures. Thanks!

I love the photo...hoped to get out today before next storm to see some wildlife but have to get framing and matting done today....so I will use your photo as my wildlife jaunt!

The reflections makes it look like the ducks are in the trees.

I agree with James...ducks in the trees, so it seems. Nice reflections!

I heard that cormorants are harbingers of the deaths of sailors in Norse folk legends. Seen them differently every since...

Interesting shot with the little guys and girls paddling about in an orderly fashion.

The ducks look like they are really enjoying themselves. Nice reflection

It does feel serene in this shot. And I am impressed that you know the names of all of the birds.

Sounds like you did indeed have a wonderful walk. 'Up The River Tay' has such a novel sound to it. :)
Lovely shot!

A great selection of birds. I always wondered whether the plural of wigeon was wigeon or wigeons (like pigeons) - but it seems, I think, that it can be both .

You can always trust the ducks to take over a shot.

Lovley photo and reflections. Love the ducks. I would like to see the curlews.

Nice shot...rewards of the road less traveled. Discovery is such fun.

IS "Up the River" still near salt water and oysters?

Really enjoy your haiku especially the hermit crab. I have always been fascinated by them. What a huge number of birds you encounter. I would be very impressed with the oystercatchers. Love them, and the cormorants of course.

OH MY your new banner photo is gorgeous, enjoyed up the river
im sharing a Arima river photo here and a poem 2 links
http://www.poemhunter.com/poem/arima-river/

How wonderful to see so many birds on your outing ... lovely reflections.
Hugs and blessings,