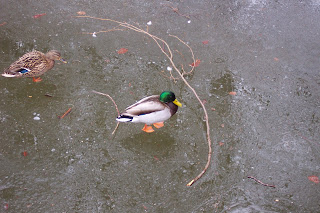 The mallards feeling Spring in the air despite the ice under their feet. One male pecked his beak onto a female's back and when water began to puddle there he lifted himself onto her and seemed to almost drown her, but hopefully there'll be chicks as a result later in the Spring.

We found a new path leading up from the river to the woodland edge and across farmland to the village of Gannochy. The sky big to the distant snowy hills and raining the joyful sound of skylarks.

The next day, under hazy skies the bus took us through snowy hills and past a silvery Loch Leven.
geese skein
across patchwork fields -
new shoots appear

(haiku previously published in Blithe Spirit, the journal of the British Haiku Society)
Quarrymill Woodland Perth is owned and managed by the Gannochy Trust.
Crafted by Crafty Green Poet at 3:25 pm

Thank you, CGP, for another informative post. Like you, I hope there will be ducklings in the fullness of time! I had never heard of the Stone of Destiny before, and enjoyed reading about it from the link.

Yes..mallard mating seems brutal and sometimes the female has to sputter the water out to breathe...I would not want to be a mallard hen....Michelle

nà from the treehouse said...

It all does sound very much merrily deep in nature.
Thanks for your comment over at the old place. I haven't vanished, just 'moved house'.
Best wishes,
N.

Your photo could have been taken from many vantage points here where I live as well!

Lovely account, Juliet. You capture the beauty and stillness and also the quiet brutality of nature that resides close by, every day.

Growing up, I was around Mallards and spent much happy time with them. I was out with the animals from early morning till late at night. They were my family.