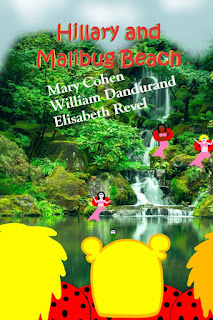 Hillary is a ladybug (or ladybird as we would call her on this side of the ocean!) Hillary has featured in a number of books written by Mary Cohen, William Dundarand and Elizabeth Revel working as a team with Dundarand providing the illustrations.

In Hillary and Malibug Beach, Hillary and her family are going on holiday to Malibug Beach. Here, Hillary is challenged by local beach goers to a game of volley ball before she is allowed on to the beach. She finds out that some visitors have been littering the beach, and the volleyball is the locals' way of restricting access to the beach.

After the appearance of a green comet causes the ladybugs to mutate, Hillary embarks on an adventure including learning to surf, exploring Malibug Beach and meeting mermaid ladybugs.

It's an engaging story, with some nice meditations on nature:

"Out on the horizon, the sky and water met. They seemed to enjoy the comfort of how they were not the same, but how the sky rested on the ocean. They were like friends who liked and needed each other".

It's lavishly illustrated, but although the photography element of the artwork is beautiful, the cartoon ladybugs irritated me, I expected ladybugs to look more like, well, ladybugs, not humanoids with ladybird wings. But I'm not a child and I don't have children, so I'm not the target audience.

This might be a nice book to introduce children to ideas around the human impact on the marine environment.

Disclaimer: I was sent a free copy of this book in return for an honest review.

Crafted by Crafty Green Poet at 11:39 am

You get a big thank you from Hillary, her family and friends.