Coltsfoot - an overlooked flower of Spring

There's a lovely patch of coltsfoot in Dalry Community Park, the small park that lies on our daily exercise route through the two local cemeteries. 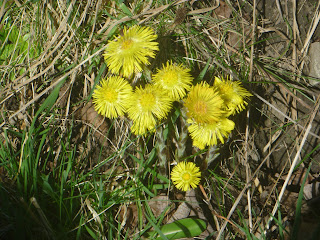 This lovely flower is one of the first to bloom in Spring, though often seems to be underappreciated. There used to be a patch of it near Colinton Tunnel, on the Water of Leith Walkway  that has now disappeared to be replaced with daffodils and primroses (nothing against those flowers but why not let the coltsfoot thrive too?)

The coltsfoot is also a good early food for pollinators, we saw our first marmalade hoverfly of the year on this patch a week or so ago and today Crafty Green Boyfriend captured one on camera: 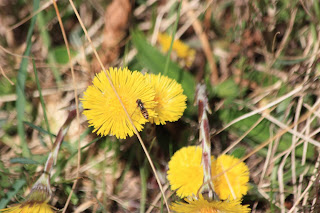 Thanks to Jeff asking in the comments, I checked to find whether coltsfoot is edible and apparently it's a great cough remedy. You can find out more here on the Incredible Edible Todmorden site.

More signs of Spring today in North Merchiston Cemetery, there were two peacock butterflies, though only the one stopped for a photo 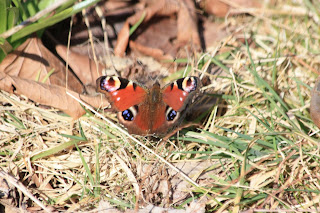 and a pair of long tailed tits were collecting nesting material 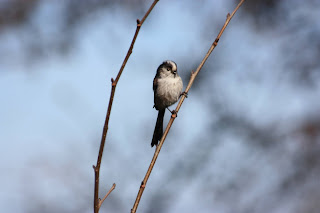 Email ThisBlogThis!Share to TwitterShare to FacebookShare to Pinterest
Thinking about: #dailyexercise, birds, In and around Edinburgh, nature diary, photos, Spring

The coltsfoot is my favourite of all the spring flowers so nice to see a photograph of it. It is out here in Wensleydale too.

I always remember finding it as a child and loving it. Seems to have disappeared though and has become a rarity.

A beautiful post on several counts: first, I'm so pleased you caught the butterfly on camera. I have still to see one this year: it continues cold, grey and windy, and I continue to shield ... so it may be a little while yet. As for Coltsfoot, such a lovely plant, and one of the first (beyond daisy, buttercup, dandelion, clover, bluebell etc.) I learned to recognise from my weekly wildflower tests in Junior School. I hardly ever see it, but rejoice when I do.

The flower looks somewhat like a dandelion. But not the leaves. Is it eatible?

Hi Weaver, one of my favourites too

Thelma - I don't see it in many places, but where I find it, it's usually abundant in that particular place

Hi Jeff, it's apparently a great cough remedy. You can find out more here https://www.incredible-edible-todmorden.co.uk/apothecary/coltsfoot

I haven’t seen coltsfoot in a long time. It used to grow freely in the field across the street while growing up. It’s nice to see your photos and learning about its medicinal uses too,

Pretty photos, and nice to see so many signs of spring. I've never heard of Coltsfoot before. Wondering if we have it out here in S. CA?

This is a new flower to me but I love the color and that it is good for pollinators as springtime can be hard for queens starting new colonies....

Beautiful photographs, I enjoyed them, thank you.