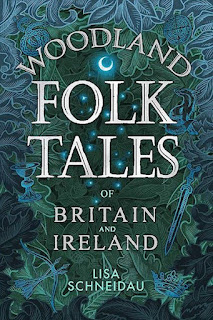 With an introduction that outlines the history and ecology of woodland in the British Isles, this book is a collection of thirty-two woodland folk tales retold by ecologist and storyteller Lisa Schneidau.

The stories are arranged thematically, starting with Wildwoods and working through themes such as Hunter and Hunted to end with The Path Ahead. Each theme is given a short intrduction to put the stories into context. Additionally each individual story is given a brief historical note. These notes give an interesting background to the stories and add to the reader's understanding of a storytelling tradition rooted in our woodlands.

Schneidau has told these stories to many audiences and they are designed to be read aloud. Each flows with a beautiful rhythm. Some stories focus on human protagonists, some mythical, some based on historical persons, other stories focus on the lives of animals and birds of the woodlands, and in many of them fairies and pixies play an important role. The characters in some stories are able to shapeshift - becoming different animals at will, which is both a magical ability but also seems to underline a deep connection with nature. Many of the stories emphasise the relationships between people, animals and the woods and the importance for humans to look after the woods and the creatures who live there.

Some of the stories have particular resonance for our current times, probably most clearly The Woodland Under the Sea in which the elite party instead of protecting their community against the rising seas in Cantre’r Gwaelod, today the site of a vast petrified forest which is now under the sea.  'The fertile plains, farms and woods they had once known were submerged, save for the occasional rooftop of a tall building, and all the people had perished.'

My favourite story in the book, The Green Women of One Tree Hill also contains an essential lesson about living within our ecological means. Three brothers inherit the land surrounding the three green women (the only trees now left in an area that was once abundantly wooded). This is a very moving story of the need for a good relationship with nature, and includes a beautifully written overview of the ecological history of the area where the tale is set.

Similarly, The Tree's Revenge is a cautionary tale about what happens to those who steal land and trees that don't belong to them.

Auld Cruvie is another classic tale of the need to live in harmony with nature and includes some particularly lovely descriptions - 'Jack also learned the calls and the language of the birds. He learned their alarm calls that all the creatures in the woods knew, foretelling danger. He learned their quiet contact calls of the woodland at peace. He knew the tiny chatter of the subsong when winter turned to spring, as teenage robins experimented with their new-found notes. And best of all, he learned the bird songs that set the woods alight with joy.

In Herne the Hunter the reader is introduced to Herne, a figure who we might wish we could resurrect today:

In times when England is in great need, or great danger, a shimmering figure can be seen riding through the great oak, beech and hornbeam trees of Windsor Forest at night. He wears great horns on his head and a chain at his neck. Two other hunters ride beside him, and ghostly hounds charge forward all around. He is the god of the Wild Hunt, Herne, the Horned One, and his business is to protect our land from harm.

Most of the stories have some sort of take away moral, whether it is how to live in a better relationship with nature or with your siblings or not to be greedy. The message however is always told within a story that is engrossing and enchanting and sometimes very entertaining.

I couldn't help smiling at The Giant with Seven Heads which tells the story of Jack, the reluctant hero who kills the giant with seven heads when all he wanted was to find rabbits. Similarly Pixy Led is very entertaining, particularly the wife's reaction to her husband's claim to have been stolen away by the pixies when in fact he'd been drinking in the pub.

This is a great collection of stories to tell in a group (or in a video call) or to read quietly by yourself.

Enchanting Woodland Folk Tales of Britain and Ireland by Lisa Schneidau, published by The History Press.

Disclaimer: I was sent a free e-book of this title in exchange for a full and honest review.

Email ThisBlogThis!Share to TwitterShare to FacebookShare to Pinterest
Thinking about: books, reviews, woodland

That also sounds like a great "Beside the couch for the long winter" book!!

Here goes my fantasy...: Herne the Hunter, leaving Windsor Forest with his aides, high up in the skies and going over London and down on Westminster/10 Downing Street and saving the country from harm! Let's hope for the next Twelve Nights!