Goodbye to the European Union 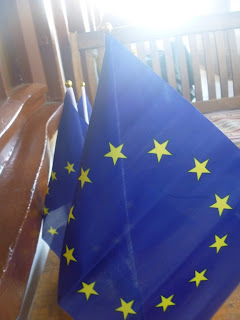 We have to accept the 'democratic view' of the people. However, in many views, a referendum calling for such a major change should require a supermajority of 60% or over to support change, not just 51.9% as it was. The referendum was called to address the internal disgruntlements of the Conservative party rather than a genuine call from the people (though admittedly the UK has never been a particularly engaged member of the EU and many people knew little about what it meant other than trivia like determining what shape of bananas could be sold).

It's ironic to hear comments now like farmers complaining that they now won't be able to get people to help in the fruit harvest (which has always depended on European labour).

The EU is far from perfect. However, it has very strong protection for nature (see this post from a few years ago) and strong protections for human rights and workers rights. Plus free movement and doesn't it make sense to join a trade association with nearby countries?

Prime Minister Boris Johnson is gloating that he has'got Brexit done' but in fact we have one year to sort out new trade deals and a new relationship with the EU so in fact Brexit is far from done.

It's a sad day for many.

Here's an excellent article about what happens after Brexit on the Politics UK site.

We Yanks must hold back our chuckles since that would sort of be the pot calling the kettle black! 'Tis a strange world.

A bit late but I'd like to add my comment still, living in Germany. There are many people over here regretting Brexit, but we are determined to stay good friends with the ordinary non-Brexiteer people of Britain and especially of Scotland whose majority voted to remain. Let us find ways to work together, we cannot afford to be separated in questions of the environment, social issues, research, safety and so on. The younger among us may live to see the day when Scotland and/or the UK joins the EU again.

Hi Nora, thanks for your comments. I hope we can find ways to work together and perhaps Scotland (or even the UK if it stays together!) will one day rejoin the EU!