The Missing Lynx by Ross Barnett 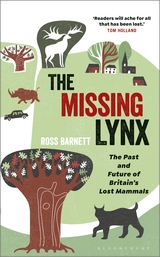 15,000 years ago, Britain was home to lynx, bears, wolves, bison and many other species of large mammals. But climate change and the spread of human populations changed the landscape and wiped out wildlife, resulting in the loss of most of our megafauna.

In The Missing Lynx, palaeontologist Ross Barnett introduces us one by one to the magnificent creatures that have been lost from these islands, some of which are globally extinct, others which are missing here but still live on elsewhere and could potentially be reintroduced. He starts from the beginning with the cave hyena which became extinct in Britain 46,000 BC and was globally extinct by 29,000 BC and ends with the European beaver which became extinct in these islands in the 16th century but which has, with some success, been reintroduced.

He examines stone age cave art and carvings to get an idea of our ancient ancestors' relationships with the animals such as cave lions that they shared their world with. He is also a mine of fascinating facts such as how to tell the difference between ivory from mammoths and that from elephants and why some mammoths grew a silky coat. He muses on how difficult it is to tell exactly when wolves became domesticated into dogs and looks at how the reintroduction of wolves into Yellowstone had a beneficial effect on the area's ecology. and suggests that Scotland would benefit from wolves too, with all the excess deer we have (though those who like to hunt deer for fun would disagree with the wolves return).

He also has this to say about the Scottish wildcat, which still hangs on in parts of the Highlands:

'The wild glens and strachs cannot even support a 5kg (11 pound) wildcat thanks to humans. It will in all likelihood soon be gone. But we won't notice for a little while. The abundance of feral cats and hybrids will ensure that the true wildcat will disappear without fanfare, masked by the abundance of a similar form.'

Barnett looks at the potential of reintroductions, rewilding and resurrection. He suggests that lynx would be an ideal candidate for reintroduction and his argument is very persuasive and includes strategies for reducing antagonism from farmers, my only issue with it is that it would seem to be a shame to put energy, resources and money into reintroducing the lynx when wildcats need so much help to remain here.


This is a fascinating and entertaining book, packed full of interesting facts, enthusiasm for these lost creatures and hope for the renewal rewilding could bring to our landscapes and ecologies.  Read it.


The Missing Lynx by Ross Barnett, published by Bloomsbury.

Crafted by Crafty Green Poet at 7:37 am

Email ThisBlogThis!Share to TwitterShare to FacebookShare to Pinterest
Thinking about: books, extinctions, review

This sounds a very good read.

Sounds like a great book. Thanks for the review. Enjoy your day, have a happy weekend!

__ And yes, we humans share a lot of blame as our climates fall toward the vile, and stray from the good that could be given to the Earthly Young. We... must invest in climatic reset! __However, historic earthly climates began their cosmic change, and certain beings became extinct, thousands of years before we added our poisons.
__ We must all guard, and enrich the prospects of the Earthly Young; all lives to come. _m