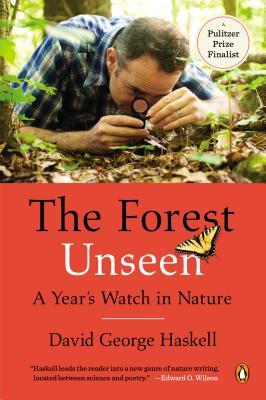 This is a wonderful book, full of detailed observations of the plants, fungi and creatures found in one acre of land in an area of old growth Tennessee woodland over the course of a year.

On a personal level, the book would have been more useful if it had focussed on an area in the UK where the species would be familiar to me but that isn't a criticism of the book. I loved the way that Haskell focussed right in to the smallest details (including for example pollen grains and ticks) and used these close observations as a way into expanding his writing into wider ecological topics. It's not just tiny things that he notices of course, he pays attention to everything that comes close to the area he's studying, including vultures and salamanders:

'The female [salamander] seeks out a rock crevice or hollow log in which to lay her eggs. She then wraps herself around them, remaining in the nest hole for six weeks, longer than most songbirds sit on their nests. She rotates the eggs to stop the developing embryos from sticking to the sides. She also eats any egg that dies, preventing mold from growing and killing the whole clutch.'

This is a fascinating book for anyone interested in looking closely at nature in their patch and reveals just how much is going on in a small area of woodland.


The Forest Unseen by David George Haskell published by Penguin.

If you're interested in reading more by Haskell, he wrote this excellent article about birdsong.

Crafted by Crafty Green Poet at 7:28 am

I enjoy my wee forest!

Sounds like a good book and pretty timely, too. :-)