How to Teach Relativity to Your Dog by Chad Orzel 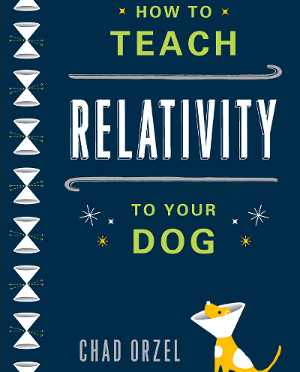 I won this book a couple of years ago as part of my prize in the Edinburgh Science Festival haiku competition. It's one of those books that I had mixed feelings about, mostly because I'm not really a dog person. So I only just a few weeks ago picked it up to read.

I should have read it sooner! This book is brilliant! Orzel (who is a professor of Physics) discusses Einstein's theory of relativity with Emmy his dog, who is curious about the world and interested in learning more about relativity especially if it can help her to catch more bunnies. Emmy acts as the interested pupil, asking questions that the reader may well have about the topic (though from an unmistakeably canine point of view). The dialogue has been used as a useful vehicle for exploring ideas from ancient Greece onwards and Galileo is a scientist who famously used dialogues to present some of his ideas.

One of the chapter headings in this engaging book about Einstein's Theories of Relativity sums up the author's approach 'Time Slows When You're Chasing Bunnies: Relatavistic Time Dilation'.

The humourous sections featuring Emmy (and a cast of other dogs, a self centred cat called Nero and  a host of probably very tired bunnies) act as introductions to each chapter which is then backed up with more in depth, rigorously scientific discussions of each aspect of relativity including black holes, spacetime and the expansion of space. The dog's point of view is cleverly woven into the more serious sections too, but in a way that helps the reader to see the science from a different and informative perspective.

The only thing missing from this book is an author photo of Orzel with Emmy.

For each murmur; the dog barks an answer; canine's reason.
__ You have had a good read, and so often we find uncountable values in that, that we had bypassed. Nifty!
_m