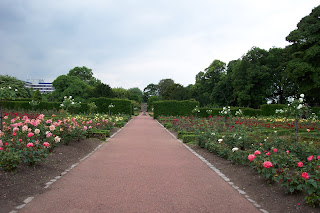 As I often lead guided walks along various stretches of the Water of Leith, I was very interested to attend today's talk about Saughton Park, one of the Edinburgh parks that is found along the length of the river.

The event was made up in fact of three talks. Peter McDougall, Project Development Officer, talked about the plans for the restoration of the park. These include the creation of a new footpath following the course of the river and a new biodiversity area along this path. The bandstand will be restored to the park, the stables will be renovated to create office space and a new cafe will be built. LED lighting will be set up round the park, ecologists have been consulted to see whether this will affect the three species of bats that live in the park (pipistrelle, Daubentons and another species, perhaps long eared bat?) the ecologists apparently said the bats won't be affected though personally I'm a little skeptical about that. I think safe footpaths are vital, but I also would hate to think that restoration of a park that includes biodiversity improvements might inadvertently have negative impacts on some of the wildlife in the park.

The other two talks were about the history of the park, which is fascinating. In 1824, the old Saughton House (which is no longer there having been burned down) became a 'lunatic asylum' which pioneered the use of horticultural therapy in its treatments of people with mental health problems. The gardens at one time included a scented garden with labelling in Braille for the enjoyment of blond people.

Email ThisBlogThis!Share to TwitterShare to FacebookShare to Pinterest
Thinking about: In and around Edinburgh, Water of Leith

__ Seeing this well posed picture and as you've written... I want to feel the walk. _m

step on step
trail of natures triangle
the apex

Interesting. Our old defunct Insane Asylum is slowly being restored and transformed for modern use of a variety of ways. It was landscaped by the Olmstead Brothers and is quite spectacular.

Interesting plans afoot. I hope the bats will not be affected, though. Wonderful roses in your photo - joys to come, Juliet.

Hello, the plans sound nice. I would like the river path. Lovely flowers and photo. Have a happy day!

sounds like wonderful walks that you do and yes, would be such a pity if the light effected the bats life.
Happy weekend
Hugs
Carolyn