Winter's Light on the River 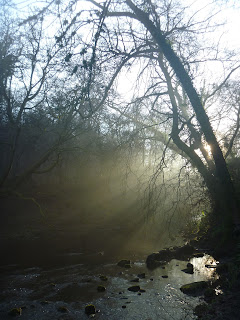 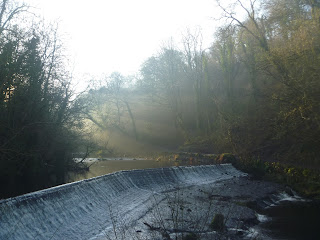 But how is the river itself? Last week I bumped into Ruth from the Water of Leith Conservation Trust as she was setting off to survey the river invertebrates. She said then that she felt that there weren't many invertebrates in the river and she wanted to check. I bumped into her again today and she confirmed that her survey had shown that levels of invertebrates were well down on usual for the time of year. Even more oddly, this result comes after last year being a real high for river invertebrates! Ruth had been finding loads of mayflies, caddis flies and other species in all her surveys and general observations last year and I noticed a lot of mayflies and other species flying above the river whenever I was in the Dells. The other odd thing is that this part of the river is upstream from the flood prevention works, which might be expected to impact on invertebrate life downstream.

So the trust are hoping that a post graduate student will take on a detailed survey of the river's invertebrates and feed these results into SEPA (the Scottish Environmental Protection Agency) who may be able to trace a cause and / or offer solutions.

The dippers were chasing each other excitedly today and will be building their nests soon. I hope there will be enough invertebrates in the water for them to bring up the next generation!

As ever, red text contains hyperlinks that take you to other pages where you can find out more.
Crafted by Crafty Green Poet at 1:54 pm

Nice photos and your post title would make a wonderful title of a book!

Nice photos and your title would make a wonderful title for a book!

It's beautiful, you haven't had the thick fog we have had.

Such lovely photo's.
Interesting to read about your meeting with Ruth too.

its story
speaks to a future world
the fast snail

This gently and powerfully, and not without humor, brings home to us why we should care about the invertebrates in the river. And the photos are lovely.